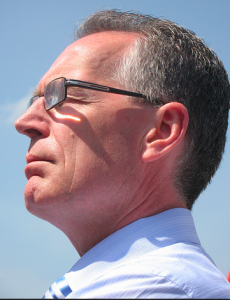 We Irish  have a huge capacity for self-deception. Tell us that our pubs are invariably friendly, music-laden places and we’ll agree vigorously. Tell us that we’re welcoming to outsiders, that we have hearts as big as all-outdoors, and  we’ll nod like one of those soft toys in the back window of a car. But in the last day or two, an example of self-deception has arisen that takes the proverbial biscuit.

It’s to do with the Sinn Féin campaign in North Belfast. Now I haven’t seen the leaflet which is at the heart of this brouhaha, so if you want to dismiss my views as therefore worthless, fine: stop reading now and go and play with the cat. But I gather the leaflet is being condemned by some as sectarian, because it points to the narrowing gap between Catholics and Protestants in the constituency, and to the fact that Catholics of voting age outnumber Protestants. Counting heads by religious background? “Sectarian!” the cry goes up.

To which there  are a lot of impolite responses but maybe not as many polite ones. I’ll pick “Balderdash”, since this is Sunday.

.Let’s look at the facts – the way things are, not the way we might like things to be. The way things are, the great majority of Protestants vote for unionist candidates, the great majority of Catholics vote for nationalist/republican candidates. (I’m not talking about non-voters here, since that’s a separate issue). But when a Catholic casts a vote for Gerry Kelly, he’s not doing so to announce his or her commitment to the doctrine of transubstantiation. And when a Protestant casts his/her vote for Nigel Dodds, s/he is not doing so  with a notion that this will reflect their devotion to the Westminster Confession of Faith. The Catholic may have many reasons for voting as s/he does but they’re almost certainly political; the Protestant ditto.

If you’re a candidate, you ‘ll want to have some idea of how things might pan out, and here you find out (yes, Virginia, it’s far from fool-proof but it’s a good rough-and-ready guide) by counting the number of Catholics or Protestants in your constituency. That gives you a  shrewd idea of how many voters are likely to mark the ballot for Gerry Kelly and how many for Nigel Dodds. That’s not sectarian. That’s being realistic. And since that gap has been narrowing relentlessly this past few elections, it’s also smart.

Tied in with this yelp of “Sectarian!” is the notion that to vote nationalist/republican or unionist is to vote mindlessly. It’s the way you’ve been brought up, you don’t think for yourself, you’re programmed, incapable of judgement in wider terms. I’ve no doubt there are some such people;but it’s condescending in the extreme to declare that because someone has political views different from yours, they must be a political moron, sleep-walking to the election booth and doing what their family and neighbours have programmed them to do.  The position of nationalist/republican or unionist is a completely valid one, every bit as valid and maybe more than those who vote for the Greens or UKIP or any other party.

So could we for God’s sake stop barking that calculation of voting intentions through counting of Catholic/Protestant numbers in a constituency is sectarian. It’s not: it’s wha we mathematicians call counting. And could we also, for God and Ulster/Ireland’s sake, stop decrying the practice of people voting along “traditional” patterns. Maybe people feel that Irish re-unification or maintaining the link with Britain is so fundamentally important, it trumps other genuine political and social concerns.  And maybe they’re right.

58 Responses to Cries of “Sectarianism!” and Grade A bunkum