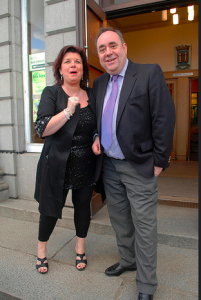 I’ve been thinking about the Scot Nats Party. It’s hard not to, since they’re receiving almost as much coverage in the English and Irish media as they no doubt are in the Scottish media. And there are a number of points that come home with paradoxical force.

1. The Scot Nats lost the referendum on Scottish independence. Not by a  point or two, but by 10% . In any language,  a trouncing. That was less than a year ago. Instead of the party slinking off to lick its wounds, something extraordinary happened: its membership increased five-fold inside six months. They are now poised to do to Labour what they’ve already done to the Conservatives in Scotland: that is, virtually wipe them out. From six seat to a projected fifty or so is nothing short of stunning.

2. There have been efforts by the Tories and Labour to discourage Scottish people from voting for the Scot Nats next week. The Labour Party, naturally, doesn’t want to be wiped out, so it’s telling voters that a Scot Nats vote is really a Tory vote, since it’ll increase the chances of Cameron getting back into government. The Tories for their part have been telling Scottish voters not to vote for Scot Nats, since they’re hell-bent on destroying the United Kingdom. But in similar fashion to the attacks on Gerry Adams by politicians and the media, the more they bash the Scot Nats, the more popular they seem to become. Frustrating or what?

3. Unionists here in our own feverish north-eastern corner have made considerable play of the links between Northern Ireland and Scotland. Granted, that involves ignoring the fact that one of the Ulster counties with the strongest Scottish links – Donegal – is not part of Northern Ireland. But hey, let’s not split hairs. Let’s emphasise  the cultural and social links between people here and people in Scotland. One strong strand in the ties that bind  – Ulster-Scots – has arisen and been claimed as a language, which it clearly isn’t, as distinct from a dialect, which it clearly is. But the central point is that Northern Ireland has the closest, warmest ties with Scotland. Always has, always will have. Our ain folk and all that. Only now a growing number of Scottish people appear to want to get out of a Union they passionately believe hinders them from achieving full nationhood. Now who does that sound like? Well yes, Scot Nats. But also Sinn Féin.  Eeeek.

4. Should the unthinkable ever happen and  Scotland does have another referendum, this time voting themselves out of the Union with Britain, a massive question confronts us: what will Nelson McCausland do with his kilt? Answers on a postcard, please, to Red Sky, c/o DUP.

MARVEL COMICS AS A CULTURAL PHENOMENON by Harry McAvinchey
Cries of “Sectarianism!” and Grade A bunkum