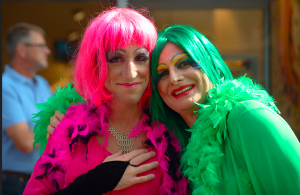 Boy oh boy – has this gay marriage referendum thrown up some beauties!  I thought I’d seen it all when I saw Gerry Adams embrace what looked like (from behind) an attractive young woman.  On closer inspection at a later point, however, it turned out to be Rory O’Neill?/Panti Bliss, who  must on his/her own give a huge boost to the shares in make-up companies. Me, I’d flinch in the face of such an embrace. Gerry Adams – may God forgive him –  looked as though he was enjoying it.

Then we had Enda in the Garden. Enda has taken to talking in a funny sort of way in recent years. Remember that speech of his in 2011, promising transparent government (a laugh in itself) and ending with the odd comment “Paddy likes to know the price of things”?  Well Enda in the Garden brought things to another level entirely. “With today’s vote we have disclosed who we are. We are a generous, compassionate, bold and joyful people who say yes to inclusion, yes to generosity, yes to love, yes to gay marriage.”  Mother of God. Fighting them on the beaches was never in it.

And to top it all, the man who’s been invisible since losing the job of top dog in the Labour Party, Eamon Gilmore,  emerged blinking into the sunlight and declared “I think it is a very powerful statement by Ireland to the rest of the world.”

What was that line: success has many fathers, failure is a bastard? Something like that.

9 Responses to Getting a piece of the gay action