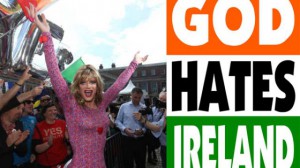 Well …it’s the day after the referendum on Gay  Marriage in Ireland .The votes were cast and a substantial majority seems to have decided  that granting this  wish from the Fairy Godmother   would not bring the spinning planets to a screeching  stop. My daughter sent me a Facebook link this morning, warning that the hillbilly hicks were displeased at the decision and far from complimenting the people  of Ireland and their Godmother ,  were blasting  all and sundry with  the following diatribe ..and I quote ….

“Ireland has absolutely failed its duty to God. It has been wholly given over to the idea that it is okay to be a filthy fag. They have allowed their fags to establish themselves at every level of society, especially in the government.While only about 10% of the population of Ireland are fags or dykes, the other 90% are most assuredly their soul-condemning enablers. The old preachers used to say fag-enablers are worse than fags because fag-enablers support the filthy beasts calling themselves gay, and they don’t even have the excuse of being prisoner to a vile lust.”….end of quote.

Well I rubbed my eyes and took a long deep breath , I discovered that this rant had been issued from somewhere or some thing calling itself  “The Westboro Baptist Church”.  Inside this institution of the raddled mind , there must be a  seething hotbed… a blazing brazier of hatred , fear  and bigotry. Then I thought again…. I have no idea   whether or not it is a fictional made-up state of a particularly  unpleasant mindset or possibly the driest spoof of April Fool proportions , but my immediate reaction was  raucous  belly-laughter. Well ..that’s the way my daughter is ….it’s the way I am  too.Neither of us could ever imagine how people become like that  and can say things like that while keeping a straight face . These  might be the kind of people who think the Great  Famine was divinely provided by a celestial architect who didn’t give a fig for the Irish people and fancied punishing them for their unworthiness…. or the same  cosmic japer who caused tsunamis,  earthquakes  and volcanic eruptions  because he was feeling a little bilious about mankind’s religious direction at a particular  time.

….Anyway, like I said , the planets didn’t stop spinning in their orbits  and doubtless a lot of Irishmen and their  “Yes”supporters  across the globe , will wake up on Monday morning with the same kind of hangover they usually insist on waking up to after a weekend’s carousing. Not much else will be different. They might feel a little prouder of themselves for doing the right thing in their quest for equality but even those who voted “No” wil also wake up to the same hopefully ,shining sun. Not too much will have changed in their lives either .They’ll still have to step into that shower , run the razor across their collective chins, brush their hair and get on with the day at hand.

The planets will not collide.Life will go on ….

View all posts by Jude Collins →
Leadership, referenda and when is it time to stop?
The DUP and gay marriage: a match made in hell?