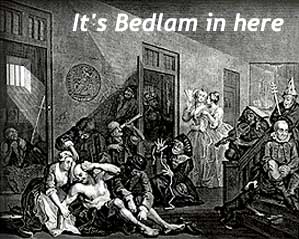 As if we hadn’t heard and experienced  enough delusional behaviour over this past few years, yet another  intellectually challenged miscreant has popped up out of the miasma of claptrap to add his voice to the already staggeringly  risible library of crackedbrained gormlessness. You might guess that the latest revelation issued  from the mouth of another  barmy minister. You’d be spot on the money.

Here’s how it reads today in Norneverland….

“Europe is being punished by God for its wickedness through homosexuality and the growing scourge of Islamist extremists, a firebrand Free Presbyterian minister has claimed.”

No…this is not another spoofer .This is simply a different version of the nonsense  issued by “The Westboro Baptist Church”. It would appear that these lunatics are all reading from the same poisonous and weirded-out   circular .This one is much closer to  home, however.

A  pastor associated with a  Free Presbyterian Church  in Derry/Londonderry , called Rev Ian Brown, has decided that  the wrath of  “God” had been felt throughout history  and was in evidence in today’s world. In the Reverand’s fevered mind some Great Controller was keeping a weather -eye on us wee humans and chastistising us now and again for our greed or our base behaviours. He reckoned that God had a hand in directing punishments  such as  the last century’s world wars .He implied that he had something to do with the rise of Hitler’s legions which were some kind of convoluted punishment scenario for mankind’s  vilest appetites.. Well in the Reverand’s head , this all powerful diety  set us all up to fail and then  punished those he felt  unworthy by their failure, by having millions of these humans culled like so many  foolish sheep during a period of  mechanised warfare, which he , no doubt set in play….a lovely fellow, no doubt…someone to look up to and emulate .

Strange reasoning indeed. Circular thinking I suppose .First you invent a God who then invents your forefathers  and then you blame the things some of your relatives  and neighbours who you don’t  particularly like when it all goes wrong .This all-powerful diety that you’ve invented ,loses the run of himself and finds the whole mess unmanageable , so you start blaming everyone else. Or maybe this God sat on a cloud out in space and dreamt it all up  in the first place ,so he’s to blame for every bit of it .It must be fun to ramble about inside this Reverand’s head…..chasing your methaphysical tail round and roud in ever-decreasing circles of intrigues.

Apparently this rush of revelation came in the ebbing tide of the Ashers Bakery Gay Cake  case and the “yes” vote on Gay Marriage in the Republic of Ireland. He sees himself and his ilk surrounded on all sides by , gays, muslim extremists and the like and , of course, this very own God of his own , is on his side in the debate.This  God is at odds with the gays and the Muslims, apparently, having made them by accident on an off-day. The ISIS scourge represents his fear of the East and homosexuality represents his fears on the West.The pastor has some notion that this all-powerful God has something to do with all this.You’d really have to ask yourself why a god would ever go to the bother of setting it all up and in motion , when he already knows …in his all-powerful way…how it will all pan out in the end.Apparently this god is “shaking his church”…whatever that might mean. Maybe he’s attempting a cocktail ….a sort of cosmic Tequila Sunrise.

Of course the pastor is  back on the old bugbear about homosexuals being “sodomites”…I wonder does that refer to female homosexuals too? Can they be sodomites as well  or are they simply left out of the equation?  His  recent sermon included the deathless lines…

“In the West, do you know what army is on the march? It’s the sodomites. I’m not saying that they all view themselves as blitzkrieg foot soldiers but I’ll tell you what, the liberal elite are only too happy to use them, fund their causes, push their rights, promote their aims. And today in our Western world they are sweeping through the states of America compelling the states to capitulate and legislate in favour of same-sex marriage.” He may have copyrighted this , so I can take no credit at all for any of his revelations .How they sparked into his mind in the first place , I have no idea at all but I hope it isn’t catching , like some awful virus or inflammation of the brain such as  meningitis.

Of course it’s been pointed out that ISIS and  the pastor  have similar views on homosexuality , but a little detail like that wasn’t going to  alter the paranoid arc of his slowly unravelling narrative.This is the kind of bent- out- of- shape thinking that arrives when you try to stand logic on its head and re-write the natural laws of the planet to suit your own twisted agenda .Everyone else is in the wrong  except for  the inmates of  this latter- day interior  Bedlam.

Norneverland …a little island  of asininity and derangement,..a last little redoubt, surrounded on all sides by evil forces.

View all posts by Jude Collins →
Going, going…
Sepp Blatter vs Prince Ali: how could they?