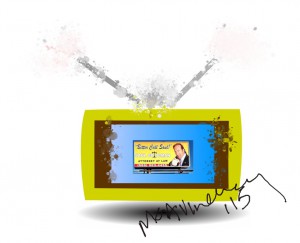 Is it just me or does anyone else notice this ?

Politicians across the lands are vying for our attention. In doing this they have become a part of the entertainment industry. Oh , they might think they are running the country but I suppose,  like everything else , the country just ticks along anyway as a web of spin is woven and money is wasted. Politicians are like performers and they have to grab our attention.Some of them, judging by their election broadcasts, even fancy themselves as bit-part actors as they perform to the cameras.Take  it like this …For years I’ve been working my way through some quality television series in the evenings when I’ve a spare moment or two. So far there have been some really good ones. Most of us have made it through “the Sopranos”, “Deadwood” , “True Detective”and “Mad Men”.It might start with a bit of  idle curiosity and then before you know it , you’ve been sucked into a black hole of intrigue that leads you from episode to episode and from season to season.Myself and the wife have gorged  on whole seasons of the stuff. We’re up to speed with “House of Cards” and now we are beached after finishing the entire run of “Breaking Bad”. Man…this is televisual entertainment, production and acting  at its very best! We have been spoiled by the quality…. What to watch next?……

In this window of opportunity …this lull in my viewing schedule…..arrives the General Election. This is what has to spark the imagination and inspire wonder…

So…is it just me?

Was the  last  great “Leaders Debate” on BBC television last night, starring the politicians  of Norneverland , the most boring piece of television, ever? Where was the fire and the passion?Where was the intrigue and high-minded debate?  All I could see was boredom and complacency.I was even wondering at one point had Martin McGuinness lost the plot too. Mind you ,there weren’t too many “leaders” on show anyway. That was a bit of a swizz.Where was Robinson,Adams and  Alasdair McDonnell ? Doctor McDonnell seems to have gone to ground entirely.Lopped off like a character in “Game of Thrones”. there are so many in that show that you’d never miss the odd one , right?

I expected the usual thing from the Sinn Fein, DUP, the SDLP  and the Ulster Unionists and  I have to say that out of the lot of them , the most eloquent and on the ball was Alliance’s Naomi Long. She had a reasoned arument right at her fingertips. In fact she reminded me of Bernadette Devlin of old at her firebrand best.She had that same eloquence. Sure , she has a unionist agenda, but she strikes me as a political creature who could fight her corner from any perspective. She has a mind that might be amenable to change.If you had her on your side , she’d be able to argue you right out of hell.She’s good at it. Isn’t that what a politician is supposed to be good at?

I’m not talking about policies here, nor political objectives .I’m talking about”performance”. If this had been a talent show like something on Saturday night television, who would you have voted for , based on actual talent and performance on the night? The pity of it all is that Naomi Long might probably lose her seat to yet another grey and boring unionist of a lesser stripe , simply because of some political jiggery-pokery and gamesmanship.There’s no denying the woman’s political savvy and talent for debate.There was some debate about economics , but I have to admit , my eyes glaze over when they talk about money .They could probably tell me anything and I wouldn’t know if they were lying anyway.Figures totalling millions and billions were rattled off and bandied about , but in my imagination I could only think that politicians of all parties are really good at wasting money and spending it in all  the wrong places, anyway….like the way roads are constantly dug and re-dug , instead of doing it right and being done with it. Or the way they spend all that money , time and fuel cutting grass verges  instead of planting wildflowers for the bees and cutting it once in the Autumn . I know …mad!

It’s simple isn’t it , the conservative parties are all led by very rich men.They’re hardly going to worry about the poor , are they?Why  would they and why would anyone who is poor  not know that and want to support them?Mind you , you could have the same argument about the support of royalty and Her Maj.

On the gay issue , Alliance, the Official Unionists, the SDLP and naturally enough , the DUP  have been found wanting . None of them , nor their entire party members appear to understand the meaning of the word “equality” . Every one of them struggled to square that circle . That alone, made life simple for Sinn Fein. Martin McGuinness and his party are right to keep their views on something like that ,a simple affair. It  really is a simple affair , only complicated by fear, religion  and personal  bigotry.  You are either “equal” or you are not .Simple….On that front they  are solid. If some Sinn Fein members have other derogatory  ideas about homosexuality , it ‘s not evident.They all appear to believe in that one  simple fact that everyone should be treated equally…no ifs and no buts.

Elsewhere , though,I felt Martin McGuinness was somewhat lacklustre in debate .It was as if he’d lost his mojo or was just tired and kept repeating the same old phrases over and over like a latter-day John Hume…..”….green benches of Westminster….”. If you say it often enough it becomes a mantra, but it looks as though you can’t think on your feet in an inspirational oratorial way if you keep doing it . Maybe  he’s just getting older, tired or  a little jaded.We all feel a bit like that at times.

The DUP’s Nigel Dodd’s is still stuck in his own little time-warp of the mind, where he thinks the IRA still stalk the land   . He tries to be all statesmanlike but soon that old bile pokes out and everything gets ugly.He can’t believe that it is 2015.Where did the time go? Where are the good old days when you could start bickering and swallow up a debate in name-calling. A great old time when you didn’t have to explain yourself in detail.

The audience used to love all that old tat but it’s not good enough now to hold their attention.He had a go  anyway ,as he did on a previous performance  and Martin took the bait. Martin would have been safer saying nothing at this point.It was all about the past and who were the good guys and who were the bad guys .Nigel  may as well have been talking about the times of  Charlamagne or Barbarossa ,It all felt so ancient.It seemed that Nigel thought that this was expected of him.That didn’t look so good , even  though it all raised a laugh from those in the audience with a better handle on historical fact than Nigel obviously has..Did Nigel think that the last fifty years didn’t happen  and that we all didn’t see it happen in front of our eyes?

It was all a bit silly and juvenile though .

I was left thinking that we would have been better off with some new blood or some younger thinkers on display .These characters are struggling to represent the modern world. It may be time for a change all round.There is too much sour history on display yet.

So there I was wondering when they’ll all catch up as I pondered  whether I should watch some new “Game of Thrones” episodes  or the latest batch of “Mad Men” or finally crack into “Better Call Saul” or that  couple of seasons of “Justified” on the back-burner….if only we had politicians as interesting as Kevin Spacey’s character in “House of Cards”.

The likes of “TV Mike” Nesbitt  is never going to cut the mustard for me , I’m afraid.

3 Responses to IS IT JUST ME? by Harry McAvinchey