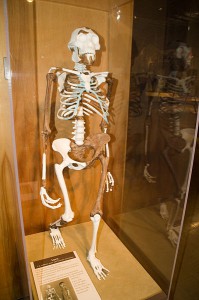 Most of us have heard the Beatles song ,  “Lucy in the Sky With Diamonds”. from one of the most iconic  albums of  20th century pop music ,”Sgt. Pepper’s Lonely Hearts Club Band” .It’s variously described as a description of a child’s painting or a veiled reference to John Lennon’s use of the psychedelic hallucinogen LSD.There’s more though. “Lucy” isn’t simply a  splintered figment  of Beatle John Lennon’s tripping imagination .She’s also the name given to one of our most famous ancestors . Named appropriately “Lucy”,  with this musical reference ,because the Beatles’ song was playing  relentlessly, on tape, at the party celebrating  her discovery some forty one years ago , in 1974.

Lucy’s skeleton was never fully complete and it has just recently  been discovered that one of the bone fragments  in the find was actually of baboon origin . Yes …somehow a baboon bone  flake has gotten mixed up with one of our ancestors. Such mistakes do happen, given the age and the  initial scattered nature  of the bone fragments .The beauty of it is that scientists are able , by studious effort and logic , to sort these kinds of  mistakes out ,eventually.  It might take a little time and detective work , but  nothing is taken for granted.

Palaeoanthropologists Donald Johanson and Tom Gray  discovered “Lucy” in November 1974 at the Awash river,  near   Hadar village in Ethiopia . They soon realised that the bone fragments dated back some 3.2 million years.She is only forty per cent complete but there was enough available structure to do the detective work and  imagine the reconstruction of  the rest of her. Lucy is important because she is possibly our only evidence , though incomplete , that our ancient ancestors began walking upright  long before they developed what became  our big brains.

The skeleton consists of some  several hundred pieces and the sacrum and pelvic bone pointed to it being a female, complete with birth canal. She would have been about  three and a half feet tall ., with pelvis and leg bones essentially like those  functioning in  modern humans. Since then,in 1992  even older hominid species have been found going back some 4.4 million years although this information was not published until  October 2009.Lucy was reliably dated  in 1990-1992 using argon -argon radiometric dating of the volcanic ash which surrounded the bones.

With this kind of constructive and analytical  study in mind., it is with some wonder that many have a very simplistic and wholly errant idea of our human origins and in some extreme cases , even the very timespan of our planet and the  age of the whole of the  known universe and our place in it.For example, since the early 1980’s , something like 40% and 50% of adults in the United States  of America claim to believe that “God created humans in their present form at one time within the last 10,000 years” . They think that we arrived , fully formed as we now appear in the 21st Century.Most of these polled in a Gallup Poll claim that all their information about  this topic is gleaned soley from their reading of the Bible. Some, near 40% of them ,believe without question ,that “God created the universe, the earth, the sun, moon, stars, plants, animals, and the first two people within the past 10 000 years”.They believe that Adam and Eve were actually literal people, complete with belly buttons, from which the entire human race were bred.There’s little talk of inbreeding either.

You may not be surprised to hear that some of the political parties that are putting themselves up for election in Norneverland also hold some of these odd  views still. It’s as though science has bypassed them entirely and that they have never heard  of carbon- dating  or the  scientifically accepted ideas of evolution. That would have been the belief for many right up until the 18th century when people had not the ready information and many were still illiterate anyway.Even William Shakespeare, in his sixteenth  century  play  “As You Like It” ,uses the line …”The poor world is almost 6ooo years old”, spoken by one of his characters. Shakespeare can be forgiven for not having the scientific knowledge that we’ve since come to enjoy but how can we excuse anyone living in the 21st century when the  hard -won information is in front of their closed eyes?.It was simple fact that for scientists and philosophers from the 18th century onwards that geological discoveries alone pointed to an earth  many millions of years old… and that was just the beginning.

Of course there will always be some kind of confusion and  even in the 1960’s fantasy film “10,000 years BC”, the lovely Raquel Welch cavorted in the same timespan as dinosaurs ,while  few batted an eye; obviously more worried that Raquel might slip out of her skimpy costume …or maybe not…..

None of  the available evidence  has made much difference to many people throughout the world who refuse to look at its outworkings or are unable to understand it.It is a frightening fact that a survey done some  mere six years ago ,discovered that 25% of the population of Norneverland  purport to believe in some form of Creationism or “Young Earth” theory  and a percentage of them have some influence in the governance of the place. They almost view their incomprehensible belief as a badge of stubborn honour and protestation.So much for “the Enlightenment” and enlightened thinking.

Some of us  are still very much in thrall to the Dark Ages.

View all posts by Jude Collins →
OMG – Stephen Nolan is an atheist!
Who is Catherine Seeley? Don’t ask Roberta McNally