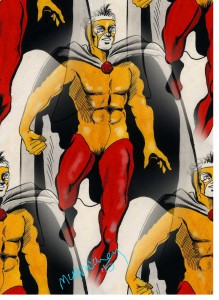 Marvel Comics were a cultural phenomenon with an influence beyond their “kidstuff” origins. Believe it or not , the shadow they have cast has had a greater influence on society than many would ,at first glance ,care to imagine.When I discovered them as a a ten or eleven year old ,way back in 1962 or 1963, they really were a rare treat, arriving erratically into the little papershop as throwaway ballast on incoming ships from America.I had no idea of the impact they would have accrued  some fifty years later but I’m glad to have been one of the very  few children in Ireland  who discovered them at the very  beginning.Some years later, black and white weekly versions of them were being reprinted and sold every week. Of course the recent films based on the characters have been an astounding success at the cinema, tweaked for a family audience, the have become the biggest and most successful money-spinners , ever, in the entire  worldwide film industry and have garnered billions of dollars in the process. That’s not the story I want to tell here, though.

Before Marvel Comics, comic characters never made the same level of connection with the readers. Comics were treated with some distain , as though it was a simple process to write a continuity and illustrate it with fine draughtsmanship.From the start though, Marvel was an “outsider” company .They were the poor relation to the likes of DC National  , the main American company, whose roster was led by the then quite staid Superman and Batman characters. There was excellent comic book artwork to entice the young readers in with garish and dynamic renderings and there were short and snappy stories of crime and science-fiction.The thing missing in those comics  was a connection to the readership.

Marvel comics ,in 1961, made right this deficit when writer Stan Lee and artist Jack Kirby, working for a lowly little company variously called Atlas or Timely, finally came up with the Marvel Age of Comics and  introduced  a group consisting of a collection of outsider freaks called “the Fantastic Four”. It was really an accidental beginning but it was the result of a long series of attempts to come up with a novel and exciting concept that would engage the readership.  Along with the Beatles,the 1960’s began right there for many children and teenagers and the ethos of Marvel Comics seeped slowly into the public consciousness.The main thing to consider,  to begin with, is that all the Marvel Comics characters were oddballs, freaks, monsters or otherwise put-upon, denigraded or had  some kind of physical or psychological problem that an equally put-upon reader could forge an identification with.Before this , super-heroes were strictly heroic figures with flawless lives. They never suffered from prejudice or discrimination. The only thing that bothered them was keeping their identities secret and fighting evil.

These new characters had some really major problems. Stan Lee, Jack Kirby and later artist Steve Ditko,  placed them in the real world ,for one thing , so there they were living in New York and not some imaginary city . Their freakishness was out in the open and prejudices soon reared its ugly head in the stories.There was always an origin story of course, usually concerning gamma- ray radiation or somesuch  that everyone was slightly wary and  afraid of in those days.The explosion of the earlier Atom Bombs and the Cuban Missile Crisis were a paranoid backdrop in virtually everyone’s lives .These superheroes had to get their powers from somewhere and usually at a cost to themselves which burdened them for life. The Fantasic Four  consisted of a man who had become  monster , a teenager who burst into flames , a girl who became invisible and a scientist whose body turned to rubber.I’ll not go into all the details here but somehow this  ongoing soap opera with monsters and villains, became a hit .The heroes may have had superpowers but they bickered like extras in “Eastenders”. They appeared to live “real” lives , albeit constantly being confronted by a plague of world-conquering villains while their social and personal lives fell apart around them.

Realising that he had struck a chord, Stan Lee,ably assisted by Kirby , Ditko and a series of embellishers proceeded  to re-invent  Marvel Comics into  a realm of anti-heroes whom the reading audience could identify with.A cast of characters began to appear and soon New York was aswim with their nemeses to oppose them. Spiderman was a socially inadequate teenager.Iron Man, although assisted by a completely novel robotic suit , had a dicky heart.Daredevil was blind but his other senses were amplified to such an extent that he could perform superheroic  and balletic rooftop gymnastics,  nearly on a par with Spiderman. He hadn’t Spiderman’s strength of course , but you can’t have everything!The Hulk had major problems with anger management and was prone to turning into a huge green monster at the drop of a hat.Within short order the X-Men had been created and Thor was dragged in from the Norse legends with his own cast of near- Shakespearean  characters to grumble about .Mutants were the Big Idea  of course. No-one outside of science -fiction and comics had ever even heard of mutants, negative space, black holes and the like ,but readers of Marvel Comics in the early 1960’s knew all about them and were well up to speed on the various problems of being a  mutated ,mutant X-Man.

Then Stan  Lee tackled racism and war  with the introduction of various ethnic characters such as the Black Panther and Sgt. Fury’s Howling Commandoes who were a diverse group  of World War Two soldiers .This platoon of racial stereotypes  resonated in a divided and racially segregated America . This was at a time of much social upheaval in America and across the world.There was the background shadow of the Vietnam War and when the  political group the Black Panthers were a real rallying  force in black culture and the  more confrontational fight for Civil Rights. There were parallels in Ireland too , of course.

Young Homosexual men and women also  embraced superhero groups like the aptly named,  “the Inhumans”, for  some hidden and knowing  succour and Marvel comics were  being  read by college students and children alike .  Students  also enjoyed Doctor Strange’s adventures into mysticism and psychedelia .Lee had the savvy to avoid talking  down to his audience, but instead, as a fan himself, he embraced them and drew them into the Marvel conspiracy as his characters began to interlock throughout the line of publications. Marvel had managed to create a hyper-real world just a little like the world we all lived in , but slightly more colourful .

The first flush of comic creation in those faraway 1960’s  brought about a plethora of still-iconic characters that have now found even more extravagant lives on the billion dollar cinema  and television screens, but all of them started out on  a cheap, wood -pulpy  paper-stock that was even cheaper than DC National’s catalogue. They might have had glossy covers and garish colours but they were not built for longevity.These outsider comics were truly the punk -rock of  popular literary and artistic  culture ,but  they went on to influence  a generation of children and teenagers  in their thoughts and deeds, politically, artistically or literary..

They are possibly  an unspoken  facet  of an entertainment and educational  industry  that has remained  only a  footnote in the hidden and secret social history of the late 20th century. It could be argued that Stan Lee, Jack Kirby et al had as much influence on my  and others worldview  as the reading of Steinbeck, Orwell, Shakespeare , Yeats  and all those other  acclaimed writers, in our formative years. Their influence on a generation  may be  much  greater than a  scant  “pop” appraisal might  otherwise warrant.