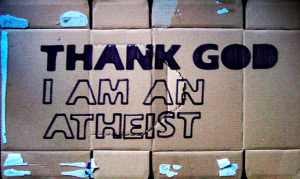 It’s not often I feel sorry for Stephen Nolan –  I more often feel sorrier for his interviewees  – but I do this morning. Why is that, Virginia? He’s been forced to say he’s sorry when he shouldn’t have been.

Yes I do say, Virginia.  It appears that on Easter Monday, while talking to a Tyrone missionary called Maud, he said “I don’t believe in God”.  Maud told him “That jeopardises your ability to chair this discussion neutrally”. Maud went on to say she sees gay issues being raised and she’s offended that they’re chaired by a man who doesn’t believe in God. Nolan said “It was a mistake. I shouldn’t have done it”. Apparently BBC guidelines on impartiality say presenters “may not express personal views in BBC output”.

Pass me the smelling salts. I’ll concede that there are those who think the  BBC is biased. During the Scottish referendum, they were massed outside the BBC protesting at its anti-independence coverage.  But to be forced to apologise for being an atheist?

Try it on the other foot: supposing he’d had to apologise for being a Christian. Or a Jew. Or a Muslim. There’d have been unholy hell raised.  But because he says he’s an atheist, he’s seen as being biased.

Well here’s the thing: he has to be something. An atheist, an agnostic, a Seventh Day Adventist, a devil-worshipper,  a Christian.  Following logically on the caller’s complaint, being any of those would make Nolan biased. Was there ever such tripe?

Everybody has to be something. There are no blank slates, except you’re unconscious. The question is not Nolan’s atheism; the question is how that affects his chairing of discussions. And the answer is, not at all. Or rather, not necessarily at all. If he were a Christian, presumably Maud would have been happy with that. But wouldn’t that have meant, by her argument, that Nolan would be biased in favour of Christianity?  Maud’s argument would drive all presenters into having no views of any kind on anything, and that’s an impossibility, even for the dimmest of them.

No, Maud, bias comes in other forms. Bias comes in language which talks about “the British Isles”. Bias comes in reference to “The Province”. Bias comes in the name Radio Ulster, when in fact the station serves only those in the six north-eastern counties.  Bias comes in the events that aren’t covered (hello Feile An Phobal) and the little NI map like an island that introduces programmes. Bias comes, or perhaps more accurately came in the disproportionate coverage of the Orange marches on The Twelfth, when the BBC’s top man sat with the Orange Order’s top man, having lunch and watching the brethren go banging past. Bias comes in forcing all TV presenters  to wear a poppy on air.

So Stephen, don’t apologise for your atheism. You’re entitled to your beliefs about the nature of human existence, just as Maud or anyone else is entitled to their belief in Christianity or any other faith/religion. That doesn’t make any presenter biased. You can chair a meeting of opposites without throwing your weight behind either and you don’t have to be a blank slate to do so, for the very good reason that you can’t be a blank slate. Shock/horror and hold the front page: Stephen Nolan is a human being.

16 Responses to OMG – Stephen Nolan is an atheist!