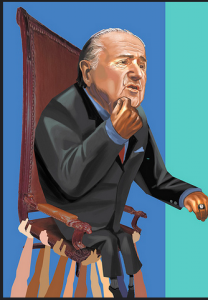 Depressing, isn’t it? To think that a man with a name like that could be re-elected President of FIFA. I mean, Blatter. Sepp Blatter. Says it all really, doesn’t it? And it could have been so different. They could have elected Prince Ali.

You’re probably wondering: who is this also-ran?  Well, Prince Ali had several things going for him – besides being a Prince and the 43rd generation direct descendant of the Prophet.  He’s the son of King Hussein of Jordan. He’s studied at Sandhurst in the UK and at Princeton in the US. He’s from Jordan, which has strong friendly ties with Israel and the US.

Jordan has an interesting political system.All 75 members of its senate are appointed by the King.  Political parties are allowed to contest one-fifth of the seats in the house of representatives – the rest must be independents. Government critics for a long time have insisted that many of the elections are rigged. Capital punishment exists for murder, terrorism or sexual offences, but any execution must get a thumbs-up signal from the King. Those found guilty are hanged; in the past they were shot.

In Jordan, a husband decides if a woman can work and how they interact with the public. They’re big into ‘honour crimes’ in Jordan. That’s where a woman has brought shame on her family through marital infidelity, pre-marital sex, flirting or rape. Thousands of Jordanian women are killed by family members to “restore honour”.

So  while it’d have been obviously great to have had a man with such a democratic and transparent tradition behind him elected, it’s unlikely  Prince Ali would have called for the full development of women’s soccer. All those shorts and thighs. On the other hand, those names: how much nicer to speak of ‘Prince Ali’  rather than speak of Sepp Blatter, a name that resounds with connotations of stomach wind and noisy toilets.  Alas, the chance to bring in a fresh face and fair play has been lost. My condolences, Your Royal Highness.

18 Responses to Sepp Blatter vs Prince Ali: how could they?