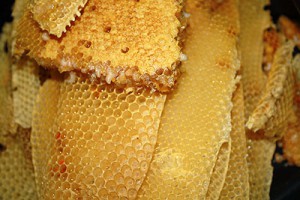 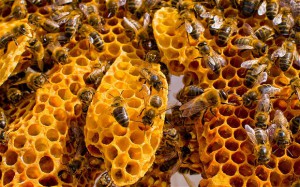 This might read like some parallel critique about the current state of our local government , but it’s not . It’s about real life outside the hallowed walls of Stormont. It’s about  the real world…..but you can draw any conclusions you like….

These are busy days .The weather is still unstable for Springtime, compared to last year where we enjoyed a prolonged sultry spell right through the days of May.There’s still work to do of course .The garden is coming back to life and even during this inclement spell my honeybees are working hard at collecting whatever pollen and nectar is available. The local  bright, yellow dandylions are mostly gone , but the bluebells are still raggedly blooming and blackthorn  and hawthorn blossom is ruffling through the trees .You can see the bright white pollen in the honeybees little leg baskets as they swerve into the hives’ entrances. They must be rifling through the treetops down at the roadside . They’ll fly for three miles in any direction to find that “beebread” but it’s surely better for them if they can harvest it nearer to home.Less air miles to fly….

With all these showery days it’s down to timing as far as hive inspections are concerned. I don’t like to stir them up if the neighbours are about in the garden either. There’s no point in having a lot of  angry bees poking about while you wreck their home .No amount of free honey will salve an over-excited, newly stung citizen.  Three of the hives are going strong and are building comb , new bee- brood and honey as they go , but there are three hives which I would call problematic ,this season. They might be alright in the end but I think they’ll need some attention too. I mentioned, a while back , the hive that had set up home in the “attic” above the broodbox and at the other side of the bee-excluder. This is a renegade bunch of bee-sisters. They seem to have abandoned all that great space below to cram themselves inro the narrower superbox on the top floor. There’s nothing else for it .I’ll have to break this whole hive down and brush all the bees into the bottom box , take away the top floor and see if they’ll get it right second time around. That’ll be a project for the next really sunny day. The other major problem was  the hive in the corner which is building honeycomb at such a voracious rate that they’ve joined a whole box together in such a way as to glue all the frames together so that I can’t pull one out without ripping out another and breaking up the broodnest. They didn’t like that either but sometimes drastic action is needed to retrieve a hive and make it workable.Left to their own devices , that’s exactly what bees will do in the wild or if they set up home in a corner of your roofspace.

They just start at a high point and begin building waxcomb.They dangle and hang onto each other as they go and direct operations down a hanging vertical plumbline  just like a builder would use a vertical line . This behaviour is called “festooning”. If they get it right and if the hive is sitting perfectly level , they’ll build lovely straight comb and Mr Beekeper will be able to quickly inspect the hive as the season progresses. Problems arise when they are too prolific or they build away unchecked, as can happen in poor  inspection weather or crucially when the hive becomes so heavy that its own  weight might throw it slightly off the square  level.  In a case like that the bees will build straight down the vertical but their work will be at an angle off- the- square.

That’s the situation that confronted me , so  I had to use an old bread knife{You’ve got to improvise}  and cut through the comb and separate each frame as best I could. Then I had to fix some of the ragged combs back in using a few elastic bands to hold them firmly. Hopefully this will bring the hive back under control.

The bee books never mention any of this , of course.Just as their bees are always well-behaved and good-natured. This is the kind of  beecraft that has to be discovered as mistakes are made …by yourself or by the bees.

I suppose it is a bit like our local government after all….