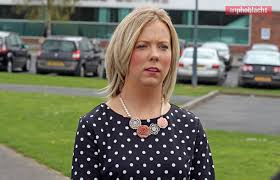 I’ve been thinking of Catherine Seeley. You know, the Sinn Féin candidate in Upper Bann at the Westminster election Having been labelled ‘that tramp’ by the classy DUP woman Roberta McNally, republicans had high hopes that Catherine might pull off a surprise victory. It was not to be. She wasn’t even close.

But actually that’s not what I’ve been thinking about. Maybe you haven’t heard? There was a young Protestant woman was teaching in a Catholic school in West Belfast and was doing rather well with the pupils. Only then somebody discovered she was a member of the DUP, so naturally the IRA sent threatening letters and she had to leave her job.

By now you’ve probably twigged what I’m getting at. There was/is no young Protestant DUP member working in a Catholic school in West Belfast. (Well maybe there is but I made up the one in the second paragraph.) The point I was making is, if that had happened – if a young DUP woman had been intimidated out of her school by the IRA – there would have been uproar. Hell to pay.  Peter Robinson, Nigel Dodds et al would have tabled a motion of censure against Sinn Féin for allowing  such a thing happened. And it would go on and on and on.

But here’s the thing: can you remember a roar of outrage from unionist politicians when Catherine Seeley was intimidated from her post? Did any prominent unionist say “But the UDA/UVF or whoever – they’re illegal! And they’re supposed to have decommissioned their weapons! This is simply intolerable – because someone belongs to a legitimate political party, they’re hounded out of their job? Too much – we’re mad as hell and we’re not taking it any more!”

In your dreams, sweet-heart.  Because it was a young republican that was involved, maybe a few tsk-tsks  were heard from unionism but that was it. We know the UDA/UVF are illegal but what you gonna do? Too delicate. Keep quiet, in the name of peace and harmony. A pity she had to go but sure raising a row would only make it worse.

There are times when the double-thinking of unionist politicians and the acquiescence in that double-thinking by nationalists and republicans make me want to claw the wall-paper and skin the cat.

35 Responses to Such a pity about Catherine. Oh well…