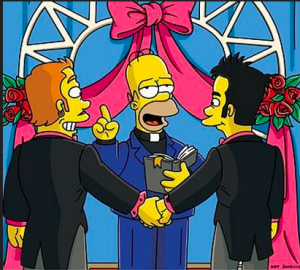 How things change. A lot of us remember the clear-cut days when Ian Paisley stalked the land warning of the dangers of Eire, where they were priest-ridden, superstitious and probably still eating with their fingers on bare-earth floors. After yesterday and the success of the Yes side in the south’s gay marriage campaign, it’s our twisted little north-eastern state that is looking like the backward one. The DUP may protest that they are standing up for the traditional view of marriage, but the fact is that the rest of the UK and the rest of Ireland simply don’t agree. They see gay marriage as a right, and the DUP’s opposition as a product of their rigid thinking.

But the attitude to gay marriage fits into a wider DUP picture. The Good Friday Agreement had a clause concerning the establishment of a bill of rights here. Have we got it? Does your granny play for Arsenal? It’d be comic if it weren’t so serious. The same DUP which is so opposed to gay marriage legislation is vocal in its defence of the rights of the Ashers cake people, picturing them as a persecuted minority whose rights are being trampled by the recent judgement against them.

Me, I see rights, promised by the Good Friday Agreement, as an everyday, less well-publicised affair. Have I the right to don a Glasgow Celtic (or even Cliftonville) jersey and take a stroll through East Belfast or Carrickfergus or Larne? I have the right but I’d better not try exercising it. Have I the right to talk in Irish as I amble through Sandy Row? Of course I have. But I may be well advised to suspend the exercise of that right.

Whatever your views on gay marriage, it is undeniable that the DUP, who with so much vigour insist on their right to be British, are going to look less like brave defenders of morality and more like the Backward Party. Its protestions of Britishness are going to increasingly embarrass the rest of the UK.  “Unfair”  you think; but unfair or not it’s how things are. The DUP’s anxiety to insert a conscience clause that would allow Asher’s Bakery to sell only those cakes with whose icing decoration they approve show what they’re really like: a party that wants to block change at every turn, fears the future and will make itself the laughing-stock of the rest of the UK and Ireland.

“Here I stand, I can no other.”  Was that Martin Luther speaking –  or King Canute?

30 Responses to The DUP and gay marriage: a match made in hell?