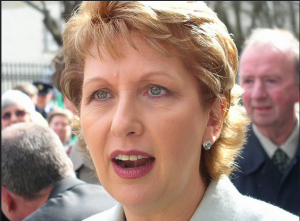 It’s odd how complicated the world is. And the people in it. Take, if you will, events at Aras An Uachtarain  during the presidency of  President Mary McAleese. It’d be fair to say that she and her husband Martin transfomed relationships between the Orange Order and the Irish Presidency, wouldn’t it? Every Twelfth a big party thrown in the grounds of the Aras, the place teeming with Orange Order members and their supporters – a truly trailblazing affair, led by Mary and Martin.

Only inside the past few weeks I’ve received a communication that gives a slightly different view on things. This person, who let’s say should know, says that the sequence of events were this.

But there’s more. My source tells me that credit for getting the Orange Order to come to the Aras was assumed by Martin McAleese, not the member of the southern Orange Order who’d actually done the work. In fact it appears this person got little thanks for his pains: in all the years of Orange-Order-at-the-Aras, he never once met with Martin McAleese, in the final two years of the McAleese presidency he wasn’t even invited to the event which he’d made possible, and he wasn’t invited to Mary McAleese’s farewell thank-you event at the end of her presidency.

Now maybe this version of events I’ve been given is untrue – but it has the ring of truth. The man who made the event happen went on to divorce, as it were, the southern Orange Order from the northern, which he saw as excessively anti-Catholic; eventually he retired from the Order himself.

Two questions offer themselves: (i) Was the McAleese presidency capable of such self-serving manipulation of events? And (ii) Have the various overtures to the Orange Order, Jackie McDonald et al resulted in any lasting and/or beneficial change?  My own suspicion (it can only be that) is Yes and No, in that order. And no pun intended.

Cries of “Sectarianism!” and Grade A bunkum
LEND ME YOUR EARS by Harry McAvinchey

20 Responses to The McAleese presidency and the Orange Order