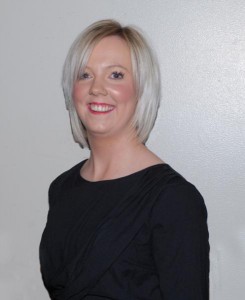 Who is Catherine Seeley? Why she’s the young woman who had to leave her job in the Boys’ Model School in Belfast when it emerged she was a Sinn Féin member. You couldn’t have  the like of that, so you couldn’t. Under threat from loyalists,  she had to go.

She’s also the young woman who drove the DUP into a fury when she was elected deputy Mayor of Craigavon.  Its leader on Craigavon Concil Carla Lockhart accused the Ulster Unionists of “childish hatred” ( yes, I know, Virginia). “The UUP’s childish hatred for the DUP was manifested when the UUP group chose to vote for a Sinn Fein deputy mayor rather than supporting my DUP colleague. This latest self-serving step by the UUP demonstrates that the UUP is more about opposing the DUP than about opposing republicans.”

Wow. Touched a raw nerve there.

And who is Catherine Seeley now? Why she’s the Sinn Féin candidate in Upper Bann. Not only that, young Ms Seeley is putting the wind up the DUP again. According to the Portadown Times, the constituency is a three-horse race between the UUP’s Jo-Anne Dobson, the DUP’s David Simpson, the sitting MP, and young Miss Seeley. What about the SDLP candidate? Well, it’s the old story: the SDLP have a cat in hell’s chance of taking the seat, but they’re hoping they can block the Shinners from taking it. The bookies and even I suspect the SDLP candidate know that if nationalists are to be in there with a shout,  they have to vote for the remarkable Miss Seeley, who, polls show, is now within two percentage points of her rival David Simpson. She believes she can do it – Sinn Féin, she points out, topped the poll in the Assembly elections in 201, 29 votes ahead of the DUP – “and this can happen again” says the remarkable young Miss Seeley. The Irish News even had a cartoon showing her sail past her brawling rivals.

Success tomorrow  all depends on those who’d normally vote SDLP. With their own candidate becalmed at the back, will they open the door for David Simpson to sail through? Or will they decide they’d rather have a Sinn Féin MP than a DUP MP?  We’ll know on Friday. Anyway, I’m hoping to interview this rising star on Periscope, shortly after one o’clock today. (And no, Virginia, I haven’t forgotten Michelle Gildernew. I’ll be interviewing her on Periscope  shortly after 12.00 noon. She won last time out by four votes, you’l remember. So to say that every vote counts is an understatement for both women.)

18 Responses to Who is Catherine Seeley? Don’t ask Roberta McNally