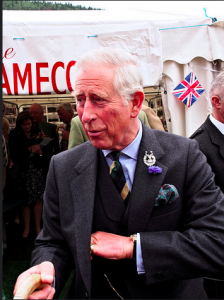 When it comes to voting for independence via referendum, most people appear to vote with their wallets. At least that was the assumption behind David Cameron’s last-minute promise of untold riches on the eve of the Scottish independence referendum.

If that is so, maybe it’s time those who pay taxes into the British Exchequer  (remind me again how much we pay, George?…You’ve forgotten. How convenient) had a look at the financial benefits and drawbacks of funding the Saxe-Coburg-Gotha family. Aka the Windsors.

To take an instance: Charles Saxe-Coburg-Gotha’s visit to the south recently. According to the journal.ie, his appearance among the Irish people cost very nearly €25,000. Over €20,000 went on transport – car hire, to visit Galway, Clare, Sligo and Dublin.  You might argue that while Iarnrod Éireann fares are brutal, they’re not that brutal. And you’d be right. But what’s the point in being a S-C-G  if you have to get on a noisy old puff-puff to take you to meet the hoi-polloi? And don’t say that he was visiting the Irish President and the likes of Gerry Adams –  he was visiting the Irish, and the S-C-Gs find stroppy paddies very hard to take. Hence the car.

However, spend a sprat to catch a whale, or whatever that saying is. Tourism Ireland is certain that exposing Prince Charles and so the world’s TV cameras to Ireland’s Wild Western Way and other places will pay off marvellously. Despite the fact that tourist numbers fell after the visit of Charles’s mammy, Mrs Saxe-Coburg-Gotha.

Mind you, the Brits themselves have to fork out to send various royals around the world:  over €5 million annually, is the latest word. And in the course of visits with his missus to Mexico and Colombia and the US, Charles and his trouble-and-strife racked up very nearly €1 million.

The economic argument behind this is that the S-C-Gs bring in all sorts of income in the form of business, investment and tourism. It could well be. But isn’t it a bit depressing to think that the world’s hard-headed business people make investments on the back of a short chat with Charles? Or that tourists flock to Ireland after they’ve seen Charles do it? To paraphrase Groucho Marx, I’m not sure I’d want to have tourists that dumb come here. As to his role in investment, I’ve yet to hear of a business person who decided a place was a profitable investment site on the grounds that Charles and Camilla had called into the place and had a simply splendid cup of tea, marred only by the appearance of that ghastly fellow Adams.

9 Responses to In the footsteps of C. Saxe-Coburg-Gotha