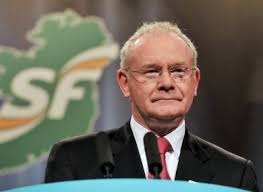 On the train coming out of London on Sunday evening, I met two young women who had been at the mass demonstration against austerity. Their praise for the speakers at the rally focused mainly on Jeremy Corbyn, but they were also very happy with Martin McGuinness’s contribution and what he had to say.

They would have been left scratching their heads if they read Monday’s editorial in the News Letter. According to it,  if McGuinness had showed his face in London a decade or two ago, he would have been met with a very different reception. “For all the talk of austerity of which Mr McGuinness complains, for all his implication of cruelty, unreformed welfare cash is being pumped out across the Province. It also happens to be the case that the constituencies that benefit most are generally Sinn Féin strongholds. It is a travesty of the truth to depict such lavish funding from (mainly English ) taxpayers as harshness”.

Three words/phrases jump out at me from that. There is of course the reference to the “Province”. Apart from its geographical inaccuracy (See my hands, Mr/Mrs News Letter? Ten fingers. I take one away and I have…That’s right, nine. As in nine counties in the province of Ulster), there’s that odd need to capitalise the P in province.  Is it to make Northern Ireland seem a natural state?

Then there’s the “Sinn Féin strongholds”. You get the imagery. Stockades, forts, rifles poking out of slits in the facade, that sort of thing. Nice one, Mr/Mrs News Letter. Sure how could you trust people that build strongholds.  And the last phrase that  jumped up and tweaked my nose was the “lavish funding from (mainly English) taxpayers”. I like that ‘(mainly English)’ bit particularly. You do know, Mr/Mrs News Letter,  that the London treasury refuses to reveal figures about how much we here contribute in taxes of different sorts to their,um, Treasury stronghold. If they did, the  News Letter might find it harder to claim that England loves us so much it’s pumping money into us, while what we pass to London isn’t worth a mention.

But anyway. We get the message. You, Mr/Mrs News Letter , are pro-austerity, and you think we should be glad that England is massively generous to us. Fair enough. But I don’t know if you’ve noticed: a lot of people are opposed to the Tory party’s austerity. A lot of people would like to know how much tax money flows out of here as well as what we get, so we could do some comparative sums before jumping up and down with gratitude. And some of us, even if it did mean less money from London, would like to be able to run our own affairs, us being all growed up and that.

In the final analysis, Mr/Mrs News Letter, it’s not Martin McGuinness that has the nerve. It’s the powers-that-be in London that display the brass neck. The Irish people have a simple right: to run their own affairs.  As long as Britain insists on running things in this part of the country, it’s a bit dumb to accuse Irish politicians such as  Martin McGuinness, of being shameful in showing his face at a London demonstration against austerity. Given a choice, not all of us  would want to keep sucking on the bountiful teat of Mother England.

Let’s talk sex: seven questions
Periscope talk on the British subvention – and the benefit/cost of the Twelfth

26 Responses to That McGuinness – what a nerve, eh?