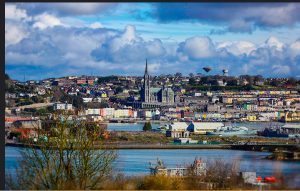 What is going on in Cork? Or to be more exact, in Cobh.  According to the Irish Examiner (not, as you probably know, a fan of Sinn Féin) reported yesterday claims that 54 members of Sinn Féin cumann have left the party because of expulsions. What expulsions? Well it seems two party councillors from the region were ‘sanctioned’. I think that means kicked out.  And as if to verify Shakespeare’s claim that sorrows come not in single spies but in battalions, on Tuesday there were reports that the entire 15-strong SF cumann in Fermoy had quit,  to protests at the expulsion of party councillor Kieran McCarthy, of Cobh, and the suspension of Melissa Mullane, of Mallow.

Sinn Féin says they’ve got the figures wrong:  five of the people who signed the resignation letter weren’t members, and around four others on the list hadn’t even been told about the letter.   Those in protest say they’re being treated in an undemocratic fashion.

What’s going on?  Something pretty serious: Sinn Féin is in the business of winning more party members, not ejecting them. The Irish Times claims one of the councillors was ejected after a dispute about a  loan for thousands of euro taken out in the party’s name, and that the other councillor got the boot for trying to undermine the party’s Cork East TD.  The journal.ie says that the two expelled councillors had their eye on replacing Sandra McLellan, the sitting SF TD for East Cork.

Money and power – two powerful elements for most parties. So is it a case of the central party bullying a smaller grouping in Cork and trying to tell them what to do? Or is it a case of local people thinking they can call the shots without reference to any unifying national party base?

I have no idea. But you may be sure that Sinn Féin didn’t eject two councillors because it didn’t like the colour of their hair. Whether the party have been overly heavy-handed  remains to be seen: certainly the local party members have given credence to the description of their county as Rebel Cork.

Given that the party’s opponents will seize on this incident to denounce the party as Stalinist, brutal, militaristic, fascist and whatever  you’re having yourself, Sinn Féin would do well to come clean and if they’ve acted in an unfair, heavy-handed way, admit it. Likewise if they’ve attempted to impose reasonable national discipline on a couple of power-hungry councillors, they should say so. The Shinners have enough people outside the tent pissing in without adding their own internal contribution.

10 Responses to The Cork rebels and Sinn Féin