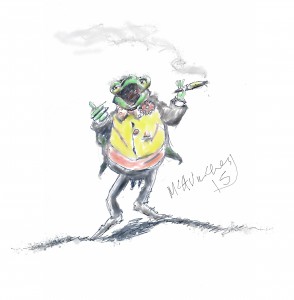 Is n’t it so typical of the arrogance and sense of entitlement that our politicians in Norneverland  cannot even accept criticism ? Sammy Wilson has been accused of calling a fellow Minister “a thug”. He said it and it’s as plain as a pikestaff. That it is not the kind of thing anyone would be sanctioned to say in a parliamentary setting anywhere else. Let’s face it , there are rules of behaviour to be adhered to if we are to call ourselves vaguely, politically  civilised. If insult is the best we can do as the epitome of a witty comeback , what good are we?

Then again , this is Norneverland  and like most things in this Wonderland Of Incivility , the rules played in other civilised and modern democracies have never really applied. Sammy and his party the DUP see everything as a war of attrition with their republican enemies in Sinn Fein or the wider world. Everything they do is reduced to this very narrow focus.Sammy blames Sinn Fein for making a big issue of his uncivil behaviour.He thinks that  at no time do they ever consider that they may have acted in an unparliamentary way. It seems that if a Norneverland politician gets his feet firmly planted under the benevolent , ever -giving table of political control , he feels that the very laws of nature are put into suspension and that he can basically do whatever the hell he likes and the public can go and hang themselves .We are paying for all of this, by the way. Sammy sees something like this criticism as an insult on his very personality .That’s the way he’s always traded words after all.Nobody was annoyed when this bloated sense of self manifested itself in him as the Official Jester in Residence. Well , Jeremy Clarkson thought like that too but he was eventually reminded that some things are still beyond the Pale in civic life. I’m afraid Sammy is rapidly turning into a Bunterish  Toad of Toad Hall. Angry eyes a-bulge as he attacked  even the decision made by the committee for standards and He  rejected the commissioner’s assertion that Mr Wilson’s behaviour brought the assembly into disrepute and then proceeded to attack the very person of the commissioner, his physique , demeanour  and even  the commissioner’s office.He appears to be in need of anger -management before he brings  a heart attack on himself.

This isn’t the first time either. This political arrogance is really what  distinguishes our fantasy -land politics from those anywhere else. it would be difficult to believe that politics in Norneverland were the same thing as those practiced in say Westminster. They are very obviously two very different beasts . Some of our politicians have been playing the game for so long that they feel quite invulnerable, even though their behaviour would disallow them from playing the game for any length of time anywhere else.

Nelson  McCausland  practises and preaches from  similar work-notes as Sammy  but with a more passive /aggressive tone.. He sees no moral shortcomings in his dealings with something like the Red Sky epic where he was found by all to be in the wrong .Honesty doesn’t appear to be one of the values he respects either .The consensus seems to be that by denying everything and getting really , really angry at  all that bad stuff  …and all those bad people ,it  will simply  all go away .It isn’t very important and anyway it gets in the way of the really good story the DUP seem to enjoy telling themselves.

7 Responses to THE RULES OF ENGAGEMENT by Harry McAvinchey