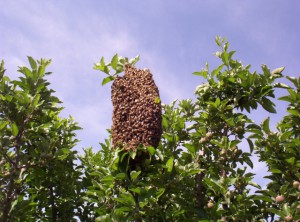 “You’re not half-wise…Do you know that?”

That was the good wife , standing about  fifteen feet away , car -door opened,  askance as she studied the inherent madness of her husband. She probably thought I was about to break my foolish neck. It should be said that there is never a dull moment in my life, either my internal one of the mind, or all that stuff that happens in the physical world on a daily basis.I was presently balancing somewhat  tenuously on the tallest ladder I possessed….not a great claim to fame by any means…the one I got for getting in and out of the loftspace once a year to place and  retrieve the Christmas -tree decorations. It would obviously not suffice in this present scenario. Yes , it was dodgily leaning on a few tangled , scratchy branches and I was balancing like a half-demented spaceman atop it, waving  and balancing a  six-foot fence-plank with one hand as I swayed back and forth , clinging and wondering how I could possibly dislodge  this ball of life just feet beyond the reach of the plank.It wasn’t really such a great idea in any case because the likelihood was that it would only create some mad  consternation  above my head ,instead of dropping the bees within my reaching hands, or put my back out of commission in the process..

I’d been  standing  frustrated , distractedly  looking up  at a swarm of my honeybees  which had just made a bid for freedom and were currently residing temporarily at roof height in the branches of a huge  well- overgrown Castlewellan Gold fir tree some eighteen feet above ground level.It was a lovely big strong swarm too; easily as big as a football and well- collected  together . From the safe vantage point on the grass, it appeared quite calm and benign as though the colony were  content in their new lodgings. There were a few scout bees coming and going , but to look at it you’d say they had decided to simply settle down and set up home right where they were.. It wouldn’t do , of course . Unless the scouts found a more enclosed and sheltered place to live , these little wild creatures would soon dissipate and be lost to the wilderness. If a wee already- wild thing could get any more feral than it is , that is what would happen. Most escaping honeybees don’t survive when they swarm, so it’s best to give them all the help you can if you are around when they attempt a breakout from Bee Colditz. Someone might find them and decide that they are really  a wasps’ nest  and destroy them.After all , honeybees look  a bit more like little furry wasps rather than fat bumble bees.

I have to say , I hadn’t expected this hive to swarm at all .I knew that there were two strong hives in the corner ; possibly  the oldest and strongest of them all, but I’d split one of them recently in the hope that they’d be dissuaded from doing it themselves  and I’d added more super honey boxes to both. One of the  queens obviously had other ideas and in the first little blast of sunshine and heat , had decided to split the family  again rather than keeping all her eggs in one basket. I’d hardly had time to put  the cup to my lips and sip that first refreshing mouthful of Punjana when the wife piped up …”They’re doing it!” Part of me is always excited when they swarm, of course. It’s the natural thing for them to do, after all.They’ve done that simple little thing for millions of years without any bother from me .But still it is an exciting moment, accompanied by a rush of adrenaline and a  panicky hubbub. There’s the thought that I’ll have yet another hive of bees to add to the garden if I can catch them.That hive that died last week would have a replacement, ready-made.

It’s best to keep calm of course. I’m used to it now and everything is in readiness. I quickly suited up , put on my bee veil and boots, pulled on my gauntlets and sparked up my smoker.All was going well , but I couldn’t initially find those bees.Where was the usual  buzzing meringue of cyclonic chaos ?  They seemed to have disappeared. I poked about in the garden and then, like something from some mad sci-fi movie clomped around to my new neighbour’s  front door.I rang the bell, fully suited like some spaced -out astronaut  from “2001,  A Space Odyssey” or “Forbidden Planet”….my smoker eking and seeping cool white smoke  around me …..very atmospheric.”I think some of my bees might have swarmed into your garden”, I said as the door opened to a mildly surprised face. The fact was ,that neither of us could see or hear them at all…anywhere.My neighbour wasn’t too perturbed by any of this , having spoken with me about bees  previously and seen them in action   . It wasn’t until I’d poked about for a while and heard a faint buzzing that I spotted them in the treetops outside his boundary -line ,but up this massive overgrown tree at the edge of his garden which he’d inherited from the previous owner.

I was beaten really .It wasn’t as if I could climb through the  dense branches of a tree like this , clad as I was and possibly carrying a  nucleus box and branch cutters in one hand .Ridiculous to even think about it …but I hoped that maybe the bees would take off again and land somewhat closer if I could somehow shake or displace them.When they  are shaken abruptly, they can dislodge and fall as one piece , all clinging to their queen.They might just land on a lower branch….perhaps…..

“Let them go…you’ll never get them up there”, said the wife , obviously doubtful that I’d be able to retrieve them and possibly thinking that I’d be carted off in an ambulance after falling from the tree while she went for the groceries.I could see the headlines myself …”Man in his 60’s Killed while Climbing Trees”.Well it would be some kind of glorious demise , wouldn’t it?…but it didn’t solve my current problem. A nucleus of bees like this is not something to be sniffed at .If you  buy a five frame nucleus to get started in beekeeping …that is , a laying  queen with  a parcel of bees, it would  set you back £200.00 at the least….even if you never collected a single jar of honey from them.To wave goodbye to something like that is a defeat for both the beekeeper and the eco-system and that didn’t sit well with me at all.

While I awaited  a miracle, idly puffing  the bellows  of my smoker to keep it burning , a  fellow who’d been working at a garden  across the road approached, his curiosity obviously getting the better of him. He probably wanted to know what this white-suited crackpot was doing looking into the tree, surrounded by wreathes of smoke. I pointed out the ball of bees above our heads and he understood  immediately , adding that he had a set of  old wooden house-ladders that  I could use. He implied that I’d be on my own after that as he kept his eyes trained skywards. He didn’t fancy being the recipient of that kind of attention, but he assured me that the ladder wouldn’t slip in the grass if I climbed unaided .

So that’s is how the day panned out. I put the ladders up beside the bees and clambered up  gingerly with a nucleus box in one hand.I put the  open box with a few frames  under the ball of bees and gave the branch holding them a sharp shake while bracing  myself on the ladders with my legs.. There was an immediate consternation of activity of course and  a fair  amount of trepidation and panic as many bees toppled to the bottom of the box and and I proceeded to shamble to  the ground, wreathed in buzzing bees.I wasn’t completely sure that I’d  actually got the queen but it was a start . Because the smell of the   queen- pheromone was still strong up in the tree, many of the bees  continued to cluster around the same spot and formed a new ball, so I had to go back up and cut the branch and bring it to the box.This I did  twice before they were persuaded that the queen was actually now in the box …their new home . Once they got the idea they quietened down somewhat and began the fanning behaviour, beating their wings while standing on the box which transmitted the new location to any confused stragglers.They all trooped into the box after that.All was calm again…

So it was job done, all but for gathering everything up and  carrying the nucleus box back to base.Another adventurous day that left the muscles aching next day , in a satisfied sort of way .

Now it was time for that  long neglected , cold cup of tea.A fresh brew  was needed for sure.