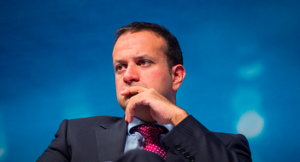 Once you begin to think about partition in terms of economics, all sorts of things jump up and demand attention.  Let’s take one example. On 15 April this year, the south’s Health Minister Leo Varadkar visited Altnagelvin Hospital in Derry. After talking with the north’s then- Health Minister Jim Wells, Varadkar said:

“Cross-border co-operation on health is one of the unsung successes of the Good Friday Agreement. People from Donegal will soon benefit from state of the art treatments for cancer and heart attack closer to home in Derry. At the same time, children from the North can have specialist heart surgery in Dublin and adults from south of the border can access Deep Brain Stimulation treatments in Belfast. There is even more scope for new exciting areas of future co-operation. We are an island of just over six million people and it makes sense to pool our resources to provide better health care for all our citizens”.

Actually Varadkar is over-egging the pudding: there is a range of other ways in which the south and the north could not just co-operate but unify (oops, hope that hasn’t upset anyone) the service they offer. Altnagelvin isn’t the only hospital near the border which could benefit people on both sides by co-ordinated or unitary planning. As Minister Varadkar says, there is considerable co-operation at present, much of it unsung. For example, a Belfast man I know – a unionist – needed a knee operation some months ago. Where did he have it done? In Mullingar. Was he irritated by this? Not one whit. He received the same level of care and attention that he would have received had the operation been done in Belfast. Almost certainly this was just one of many cases where a bottleneck in one treatment centre in the country was counter-balanced by taking up slack in another.

If we can get this commendable level of co-operation while maintaining two completely separate health services, think what could be achieved if we had one health service for all of Ireland.

One final point, a matter which puzzles me a little but which no doubt some of you will have an immediate answer to. The south spends more per capita on health than the north, yet few would say its health service is superior to that of the north. Why or how is that? Is it a case of kindly Mother Britain taking us under her health wing? Or another example of those incompetent, disorganised taigs south of the border who couldn’t run a raffle?

4 Responses to A tale of two health services