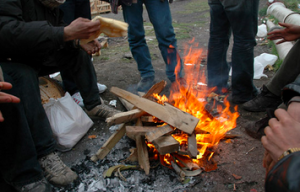 David Cameron has expressed his sympathy over  the situation at Calais. As you probably know, some 4,000 refugees are living in camps at Calais and trying to board lorries to smuggle themselves into Britain via Eurotunnel. Last night a young man trying to do just that died. David Cameron, as I say, has been feeling the pain: “I have every sympathy with holidaymakers who are finding access to Calais difficult because of the disturbances there and we will do everything we can to work with the French to bring these things to a conclusion.” Home Secretary Theresa May has ordered up 1.2 miles of fencing – dubbed the ‘Ring of Steel’ – to secure each side of the platform at Coquelles.

Where do these refugees come from? A lot of places, including West Africa. And what do they all have in common?  War and poverty.  The UN  puts Liberia, Sierra Leone, Guinea and Cote d’Ivoire among the poorest countries on the planet. Sierra Leone, in fact, come at the very bottom of 175 nations. Other refugees have fled poverty and war in Syria, Iraq and beyond.

Two things are needed regarding refugees at Calais. The first is to address the source of the problem, which is political upheaval and poverty. You don’t stop massive poverty with over a mile of fencing. The second is to see the Calais refugee problem in perspective. There may be near to 4000 people in Calais camps, but over 60,000 people refugees arrived in Italy this year and the same number arrived in Greece. And the figures are due to rise. Compared to that, the number making it to Britain from Calais is microscopic. Professor Betts from Oxford University makes the point rather well:

“At the moment, the public debate has been exaggerated to see this as a UK problem. It’s not a UK problem, it’s a European problem and it’s a global problem”. What’s needed, he says, is less emphasis on cracking down on smugglers and more on “ensuring the human rights access and the humanitarian access to protection”  that these thousands of fleeing people need and are entitled to.

There are 100 million homeless people in the world and some 795 million people suffering from hunger. If we can have world economic conferences why can’t we have world people conferences?  Meanwhile, Britain’s reaction to the Calais manifestation of the problem is like a man with a noisy beggar at his door. He expresses sympathy with passing pedestrians, installs a security system and buys  a pair of ear-plugs.