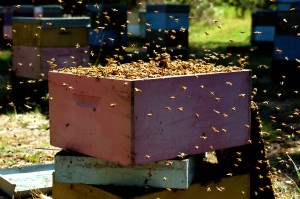 The only thing that can possibly ruin the beauty and stillness of this beautiful July morning  is the  awful harsh quacking of that wee discontented dog. No…it’s not barking mad…it’s quacking mad.It probably hears some equally noisy little mutt annoying someone else’s reverie some  two miles away and is answering in kind. Quack, quack…..Somebody…please give that dog a bone.

It’s still again. If it continues to be warm today I’ll have to sort out that hive I looked at yesterday. It looks a s though it is honey bound .The bees have stored so much honey in the second brood box I gave them that they’ll  soon leave no room for the queen to lay…if she is still at home.. Each cell of virtually every frame is full of capped honey and the box of  narrow super frames  which I put  above them is  still empty . They haven’t bothered going upstairs at all.Maybe they don’t like those new plastic frames I’ve just bought .You never can  tell with bees.

Before I do any of that,  there’s some painting to do outside .The soffits and fascias around the roof are in dire need of a lick of paint. I might as well ; the   sun is warm and welcoming and they’re at it again on the radio. The usual thing this time of year.Flags being flown where they’d rather not be flown.I could go on about this annual nonsense of insecurity ,  but let’s face it the laws of Common Sense have long been suspended in this Norneverland …A World Of Unenchantment. You have to laugh at the absurdity of it all otherwise you ‘d  have to plead insanity.

I noticed on my walk  the other day that the usual huge pile of thousands of wooden pallets have  arrived as if by some magical process of mental  manipulation to the site of the annual proposed bonfire.  This salting of the earth annually is a requirement in Norneverland to expel all the evil in the ground and to burn the malign spirits residing deep in the earth.No one sees the pallets  arriving . I wish I could  conjure up magically  some free timber  boards every time  I had a project to build ,but this timber is strictly for occult purposes only … and no other…hewn from specifically blessed magic trees, built into wooden pallets for ease of transportation. Their arrival was  swiftly followed by the mystifying appearances of various overstuffed  sofas and items of  unholy household furniture .The pile grew exponentially within days …as it does every magical year until it presented one hell of a mighty mountain of inflammable  drek.

No one had noticed, of course , that since the hallowed flames  took hold a year ago  and cleansed the land of any paddywhackery and popish malevolence,that  a brand new set of traffic lights have been erected right beside the bonfire site. It might have looked like a good plan on a map somewhere and seemed like a good idea or it may well be a test to see if some new fire-proof alloy  has the potential to be used across the land …or possibly it was a planning oversight and on the twelfth  morning we could be confronted with a molten puddle of plastic and metal across the bubbling tarmacadam. A little foresight goes a long way. After all we now reside in the 21st century and electrical traffic lights are part and parcel of modern life on our roads and streets. In Norneverland  they’d need to be fire-proof , of course, wouldn’t they?.

Now would be a good time for action you might think, and of course , that is exactly what came to pass.Lovely shiny new  wire barriers have also appeared ,as if by magic, to corral the bonfire area and contain the about- to- be -burnt -mountain.They’ve even put some handy little signs on it at various equidistant places. If you slow down while driving past  , you can just about read the declaration in small type……”NO DUMPING”… I was left thinking about stable doors and bolting horses….It’s all about timing , isn’t it?

Back with the honeybees , painting chores  finished…

I had a really good look at the corner hive and have decided that this must be the one that recently swarmed .There is  some space inside  but there is a lot of full honey frames  in the brood boxes too   so I took a couple of full honey frames out of it and replaced them with empty brood frames in the off-chance that a queen might need laying space. I say , the off -chance because  although this is still a very full and active hive , I couldn’t find a laying queen which possibly means it is now a hive in transition. That is, it is awaiting a mated queen to start laying again after the original queen absconded.She is now housed in her new home and appears to be doing well at another location.

In the meantime the flying foraging bees coming back to the original hive  are not being replaced with new workers which means they’ll need a new leader who can lay eggs and create new bees to replace them .They only live for about a month after all.. I’m hoping they are in the process of making a new queen.There were several already opened peanut -shaped swarm cells in evidence  which could mean that a new virgin queen is in residence but has not taken her maiden flight yet and returned to get down to business as an old married lady. It can happen that she’ll get lost to the skies, of course . There is a family of swifts constantly dive-bombing and picking up sweet treats on the wing, so Her New About To Be Majesty may be collateral damage already .She’s really only safe at home. The bottom of the garden has become something of good dining spot for the local birds who possibly see it as the Cafe du Jour for fast food.

In case she hasn’t survived her maiden flight , I’ve left two queen cells still intact, which I found in the bottom box ,so another queen or two might take her place. I cut them out and fixed them to a frame with elastic bands  and left them to see what the bees will do.If  all goes well , the first one out of the cell will kill the other and take charge of things and put her stamp on the hive. If there is a queen there already, either she or the other bees will tear down these queen cells and life will be business as usual. If all this fails , the hive will gradually begin to die .That can happen too and a new queen may have to be ordered to save the colony.

Yes …there are still  some things more important in life than flying  big flags and lighting ever-larger  bonfires…..