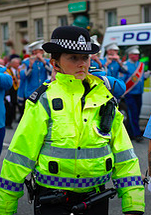 I know that greater minds than mine have devoted many hours to this but would this work?

We tell the Loyalists that all the parades they currently have that are not contentious will be copper-plated that status from now on by the Parades Commission! (assuming acceptable standards of behaviour are adhered to, of course). No last minute rush to get a slew of contentious parades on the docket now boys – play fair.

We tell the Nationalists that the Loyalists will no longer try to parade along the routes that are contentious. As a one-off concession in Ardoyne to kick off the bonhomie of my brave new world, the Prods get to complete the return leg of their parade but henceforth, they accept a re-route.

Bish, bash, bosh, everyone gets to go home and Jude can celebrate his birthday in peace from now on!

I think why the Prods are so relentless on Ardoyne is that they fear the “erosion”. “If we give in here, where will it end”. If you draw a line in the sand, the erosion ends and so too does the need to rail against it.

Oh it’s probably already been thought of and rejected but what the heck, I thought I would give it a go. It’s amazing the crazy notions you come up with on holiday. Call me a naïve, fool but might it work? Would the Nationalists buy it?

View all posts by Jude Collins →
The early death of Ali Saad Dawabsha
So what’s the real story?

18 Responses to PARADES! by George