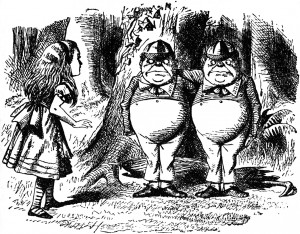 “Why, sometimes I’ve believed as many as six impossible things before breakfast.”

The latest summer  {Lord Sewel/John Bercow} scandals have brought the House of lords back into focus . You have to ask yourself what the House of Lords is all about? What is thepurpose of a thing like that in a democracy? Money wasted , really , isn’t it ?Whose money? no…don’t ask. The man  Sewell has to find money for his whores and coke somewhere …why not us , eh? Then there are The Speaker John Bercow’s motoring  and alcohol bills .Apparently we spent £1000.00 on his alcohol and more on his chauffeur bills across town. John enjoys a bit of comfort and is partial to a nice glass of wine and a very specific  whiskey.Well , you couldn’t say we weren’t generous, could you.We like to look after our politicians and throw a little hospitality their way.

Talking about money  being wasted…. .{Who was?} ….What’s Our Marty doing flying to America, closely followed by Theresa Villiers ?.Our Joint Great Leader is away to explain to anyone who’ll listen  that we can’t agree on anything in Norneverland because “We can’t agree until everything is agreed”. That’s a bit like handing out blank cheques, mind. With that kind of talk we’ll be circling the wagons like a spinning top …forever.

“Alice: Would you tell me, please, which way I ought to go from here?

The Cheshire Cat: That depends a good deal on where you want to get to.

Alice: I don’t much care where.

The Cheshire Cat: Then it doesn’t much matter which way you go.

Alice: …So long as I get somewhere.

The Cheshire Cat: Oh, you’re sure to do that, if only you walk long enough.” …Lewis Carroll {“Alice in Wonderland”}

Have n’t Our Marty and Theresa our aristocratic Secretary of State  heard about e-mails? What about Skype?…No ? What about that other sci-fi thing that Jude loves playing with ….whaddayacallit /…Telescop….e ?…No ….”Periscope”…That’s it .Haven’t they heard that you don’t have to climb onto a plane and fly across the planet anymore. You can sit in your own home and talk to anyone , anywhere via video-link .They even do it in Court rooms nowadays.

What is there that needs further explanation, anyway?All that travelling money wasted too …hotel suites , the odd meal. I know Our Marty  doesn’t take a drink , so no Devil’s Buttermilk for him on expenses …but he might be partial to a nice bit of lobster  or  a buttery  medium -rare ribeye ..the man has to eat ……when we’re worrying about saving the pennies to fund all these coke -snorting and chauffeur-driven  Lords . We’ll  need a few shillings on the side  for the Health Service as well…or maybe to put a few soldiers on the streets. There’s talk of taking the war  to ISIS , after all. …you know , flushing them out on the streets of Manchester, Belfast  and that….We’ve got to be seen doing something …haven’t we?

So every penny obviously counts, eh? I wonder when the good citizens will cop on and actually take an interest in what’s going on around them and really do something about it.