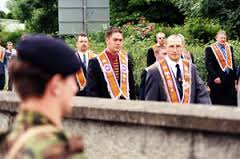 It’s always good to be open to new information. Sometimes that information can jar against the information already in your head, contradicting it or scraping abrasively against it. Other times it fits in neatly with your current world view.  I had an experience of the former yesterday, so I’d be grateful if someone could tell me if I’ve got it right.

I was on BBC Raidio Uladh/Radio Ulster’s Talkback, and a man representing the Orange Order was on the other line. When I mentioned the thousands of marches the Orange Order holds every year, he told me that this was incorrect. He didn’t say how many Orange Order marches there are each year, but he did say ‘a lot of’’ these marches were competing bands, not Orange bands. I tried to establish if these bands took part in Orange marches – was that the prize for which they were competing? – and if so, what was the distinction between being in an Orange march but not of an Orange march. For some reason I didn’t get a clear answer, so if someone out there can explain this distinction – between competing bands and bands which march as part of an Orange march – I’d be grateful.

Finally, the ‘Armagh GAA legend’ as William Crawley referred to him, Jarlath Burns, was on the programme also. He’s a Catholic primary school principal in Bessbrook and he’s visited an Orange museum and speaks warmly of the welcome he got and how ‘Failte’ as well as ‘Welcome’ in lots of other languages greets  you at the door. He appeared to see this acceptance of the Orange culture as a coming together of Irish people from different traditions and a shedding our historical baggage so that we can reach out to each other. Is he right? Or is the Orange Order intrinsically anti-Catholic and no amount of culture or religious talk will paper over that gaping crack?

93 Responses to Some baffling questions about the Orange Order. Can you help?