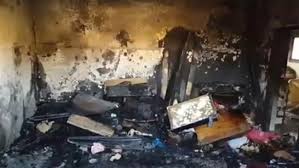 Earlier today,  an 18-month-old Palestinian child was killed.Ali Saad Dawabsha was burnt to death and his father and mother and 4-year-old brother taken to hospital in a critical condition. Shortly after 2.00 am, the killers tried unsuccessfully to gain access to another Palestinian home. They failed, so they moved to the home Ali Saad Dawabsha, broke windows and threw in fire-bombs. The child was burnt to death.

In 1998, when plans for an Orange march  down the Garvaghy Road were at their height, three young brothers – Richard, Mark and Jason Quinn, aged 11, 9 and 7 respectively – had their home in Ballymoney attacked. Around 4.30 am, a petrol bomb was thrown through the window of their terraced house. All three boys died in the flames. Their mother, her boyfriend and a family friend escaped with minor injuries and shock. A number of loyalist bands defied RUC requests not to play music while marching past the boy’s grandmother’s house in the days after the killings.

It’s almost certain that many Israelis, including Jewish settlers,  are horrified by the death of Ali Saad Dawabsha and the injuries to his family. You could say they had nothing to do with it.  But that’s not how the Palestinian leader Saeb Erekat sees it. “This is a direct consequence of impunity given by the Israeli government to settler terrorism. We cannot separate the barbaric attack that took place in Duma last night from the recent settlement approvals by the Israeli government”.

Likewise I am sure there were hundreds if not thousands of Orangemen  horrified by the action in Ballymoney. But as with the death of Ali Saad Dawabsha, the tail of responsibility is a long one. Those who committed the barbaric crime in Ballymoney were almost certainly motivated by the same fervour that convinced the Orange Order of its right to march where it pleased. Just as no Jewish settler, no member of the Israeli government is free from guilt over the death Ali Saad Dawabsha, none of those urging the right to march down Garvaghy Road, no member of the Orange Order is free from guilt over the deaths of Richard, Mark and Jason Quinn. The Orange Order does provide a fun day out for many. It also provides the seeds of hatred and murder for some of its supporters.

25 Responses to The early death of Ali Saad Dawabsha