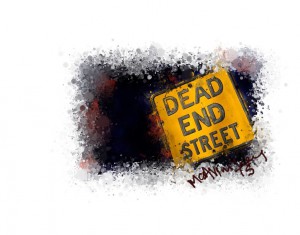 So that’s it ! Politics are promoted as the art of the possible. Are they not? Within Norneverland they’ve always been played in a curious way way compared to most other places , given that half the population appear to cling on by their breaking fingernails to a teat- mother that really doesn’t want any part of them and  the other half of the population which essentially wants to free itself from that  same mother’s apron strings wants to  promote that idea of independence . Any forward movement will take a little negotiation and if you don’t want to move forward, maybe negotiation is not what you really, really  want at all. You might think it better not to discuss it at all in the hope that this new scary idea might somehow go away if you wait long enough…..Or maybe not….Unionism believes that if they don’t discuss the very idea of a united country ,for example,  it might just go away.They might be right. Nationalism or republicanism seems to have no such fear of the unknown but in order to promote it , they need to be able to work at real politics.That means discussing the unspoken with people who don’t really want to talk about anything as frightening as something so abstract….and at the moment , it really is abstract.There are plenty out there railing and roiling about something they really haven’t thought out in any kind of detail. They’ll even get out on the streets and fight over something as nebulous as blown smoke.

Baroness Nuala O’Loan has now  thrown her hands up in the air , frustrated ,simply because she sees  society beginning to break apart because our politicians simply cannot solve problems.Nearly twenty years after agreeing to resolve our problems by talking them out rather than killing each other for a change, we’ve reached the buffers of our political skills. Not to put a fine tooth on it , we’ve basically lost the plot. It is occurring to some that we are not really very good at politics at all….or we are not being allowed to really try to play the game properly.

If you looked around , what with anti-internment marches and Orange marches, you’d imagine that we were fast -attempting to reel back the years to the comfortable sure-footedness of the thing we do very well….conflict and violence.You might ask , what is the point in marching about “Internment” nearly fifty years after the horrible events of 1971….if not to simply bring people onto the streets in the hope of a good old ruck. There are no longer cries of “One Man …One Vote” , which brought us onto the streets ,to act as a focal point for dissent, so we are forced to remember  back through the years to some awful thing that will bring back that sense of dissent. Its not really there now.The game has changed subtley and many have not yet caught on.

You might ask what’s the point in remembering the Battle of the Boyne in  1690 ,either , when all that is recalled is a fantasy, with as much relation to reality as Disneyland. Handsome  kings on pure -white chargers, anyone? Wasn’t King Billy of Orange  in league with some bloody pope , anyway ?What happened to that  real story? It sounds a lot more interesting than the fantasy that is annually promoted .Like the fantasy that the IRA popped out of nowhere with no apparent reason for their existence.

Who could really believe that men and women would take up arms against a state …just for a laugh or to get out of the humdrum world for a bit of adventure ? No..there were reasons for all of that alright. Those reasons then , mightn’t have been everyone’s choice, but some thought they were the best ideas in town at the time.That was then .This is now.Meanwhile the violence is being internalised. There was talk last week of someone being  literally crucified . Yes.why should we be shocked that such barbarity still roams our streets?That’s the kind of thing we’ve always been good at on the fringes of our society. For all the talk of culture, what we excel at is making headlines for violent behaviour.A bunch of people actually nailed another human being to a kitchen worktop in a house in Belfast .  Yes…a crucifixion just like those old Romans excelled at .You could hardly make something like that up. I had a discussion rcently with a person about the sanctity of life ….unborn babies  or otherwise and he was of the opinion that the human being was basically a good egg. My take on it is that given the circumstances , the human -being is a very focused predator , only held in check by society’s laws. Obviously society’s mores don’t always work too well. Certainly not in some parts of Norneverland.

Many of us appear to be happier with these seasonal sureties than with the really difficult stuff of problem-solving.We ‘d rather use a stout club to crack a nut than apply  the pressure of a nut-cracker.Look at the mess our politicians have made of the fair wind they were given . Presidents and Prime ministers lined up to  push the ship Norneverland out of dock.They had a license  and finances to build a fair society on the bones of all that conflict and they allowed that power to trickle through their fingers to the point where local government is almost impossible .Real politics takes real leadership and new unique ideas…not the flummery we’ve listened to on an-unending rerun this past few years.

Politics…The art of the possible ? Some of these characters, haven’t even the wherewithal and  wit , the very social skills needed to communicate in a rational   and reasonable manner with their fellows , in the corridors of Stormont ….never mind solve the social problems confronting us.How did we ever think we could come up with solutions  to complex tasks  with such a bunch of unimaginative incompetents?