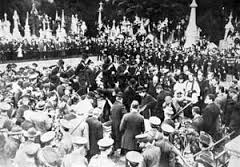 Just over 100 years ago, in the midst of a World War, a revolutionised Ireland with secret plans being formulated for an Easter Rebellion, an 83- year- old Fenian, by the name of Jeremiah O’Donovan Rossa, died in Staten Island, New York on 29th June 1915. The atmosphere of the time demanded that the body of Rossa be returned to Ireland and be used as a propaganda coup and a call to arms to reawaken the Irish Nationalist revolutionary spirit, and that it did. In essence those planning a Rebellion could not have hoped for such an ideal circumstance, Rossa could not have died at a more opportune time, a “heaven sent” moment. Time was not wasted as immediately IRB leader Tom Clarke telegrammed John Devoy to “send his body home at once.” But who was Rossa and why would the State want to commemorate this man whom his ideals would be antithetical to theirs?

Born in West Cork, Rossa witnessed in his lifetime the brutality and flaws of British colonialism and imperialism – this shaped the man. He witnessed and was personally affected by the brutal Great Famine, losing his father to death and eventually members of his extended family to emigration – through his hatred for the British he felt compelled to revolutionary means, setting up the Phoenix National and Literary Society that was to amalgamate with the Fenian Brotherhood (IRB) in 1858. Rossa made it his life’s ambition to end British rule in Ireland that resulted in him serving two jail sentences, the second in 1865 for High Treason culminating in a life sentence. Facing the might and callousness of the English penitentiary system that aimed to destroy Fenian prisoners, treated with absolute contempt, subjected to inhuman and cruel treatment, he was returned as MP for Tipperary in 1869. Exiled in 1871 to the US as part of a British government amnesty, Rossa’s revolutionary exploits continued as he re-emerged himself in the Fenian movement, setting up “dynamite schools” with the aim of bombing the economic heartland of mainland Britain in what became known as the Fenian dynamite campaign, also fundraising, hoping to initiate another Irish rebellion.  Rossa made a number of visits back to Ireland, disappointed by the growth of constitutional nationalism and the decline of Fenianism. His death in 1915 may have been the end of this man, although for some it was the beginning of his legacy. It became a unifying symbol of revolutionary zeal, inspirational to the new generation “rebaptised in the Fenian faith.”

After lying in State, the funeral that took place on 1st August 1915 was meticulously planned and choreographed by the IRB under the guise of the Wolfe Tone Memorial Association. Many of those who were later to organise, fight and die in the Easter Rebellion were prominent in the organisation. The provocative graveside oration of Pearse is perhaps the most significant element to the funeral, a mobilising speech that was extraordinarily moving and emotive, an irrevocable indication Ireland was preparing to live out Rossa’s legacy and rebel. Pearse had one simple instruction whilst preparing his oration, from IRB leader Tom Clarke: “Make it as hot as hell, throw discretion to the wind” and that he undoubtedly did. In the oration, Pearse made links to past revolutionary ideals, talked about the new generation and their exploits and set in motion a moral justification for the forthcoming Rebellion. This became the resonate part of Rossa’s legacy.

A number of questions emerge. Is Rossa the type of person that the State really want to commemorate? In the eyes of the State, they are surely commemorating what they would deem a “terrorist”? Rossa fought for the “cause” of Ireland, the same “cause” the Irish State feel very uncomfortable with and have so often criticised.

I attended the State’s commemoration on Saturday and was unimpressed with their handling of the event that was the catalyst for the Easter Rebellion. Did the State commemorate Rossa because they had to? Or because they wanted to? Was it a tick box exercise as they wiped the sweat from their brows and sighed in relief? Did they believe by not commemorating they would be missing out on political gain or conceding to political revivals? Is it wrong that President Higgins and Taoiseach Kenny didn’t utter a public word at the commemoration about Rossa? Were they embarrassed? Perhaps with Anglo-Irish relations improving, Rossa deemed once as “Britain’s greatest enemy” doesn’t fit comfortably. The President, Taoiseach and Minister Humphreys spent as long saluting and inspecting armed forces as engaged in commemoration. Glasnevin Trust Chairman John Green delivered an oration on Rossa. There was no mention of his IRB exploits or the involvement of the IRB preparation for the funeral. He made an assertion that Rossa, as he lay on his death bed, dementia riddled, supported Home Rule and John Redmond – in effect Constitutional Nationalism / politics. How wrong and historically inaccurate. After the commemoration I spoke with Dr Shane Kenna, biographer of Rossa. He was appalled that the state hijacked the event to suggest Rossa died a constitutionalist. He didn’t. This allegation was proven fictitious as constitutional Nationalists tried to claim Rossa’s legacy, particularly at a time when their support for an unpopular war was doing them considerable damage. Rossa’s wife Mary Jane agreed the allegation was fabricated, yet the State commemoration decided to go with it! Why? Well, to call Rossa anything else would be dangerous ground for them, handing the political initiative to others.

After Saturday’s commemoration the question has to be asked: are we in for a year of romanticising while ignoring the militaristic nature of Ireland’s History and the formation of the Free State / 26 county Republic? The State’s commemoration lacked the historical pageantry of others yet was no less a propaganda exercise. It was clear the State’s commemoration sought to ignore the true nature of Rossa’s ideals –  perhaps given the global revulsion at “terrorist” acts against states – and to definitely distance themselves from those who continued the principles as set out by Rossa.

The History of Ireland will be fought over during the next year in a propaganda war between a number of parties. Political point-scoring will take prominence as revisionists will emerge to interpret this seminal period for their own gains. Perhaps these parties would be better fighting for the country’s future, as we are arguably further away from achieving a 32 county socialist republic than the people we commemorate were, 100 years ago. I feel the State is very uncomfortable commemorating the ideals of 100 years ago as they certainly do not support the ideals of Rossa, Pearse et al. In my opinion, commemorating for the sake of it is worthless.

In life Rossa became the personification of Irish resistance to British Rule: he represented the inextinguishable Fenian flame. In death, Rossa became a unifying symbol, he was an “unconquerable Irishman”, and he was the unrepentant Fenian revolutionary. He died wanting the “absolute freedom of his country”. He died a fighter for freedom not a supporter of constitutionalism and diluted devolved government within the very system he detested and passionately fought against. I’ve no doubt after Saturday’s State commemoration, Rossa would be “turning in his grave” at the thought of being hijacked for modern political purpose by those looking to rewrite History, by those who feel uncomfortable with Ireland’s past, by those who are embarrassed by Ireland’s past – “the fools, the fools, the fools.”