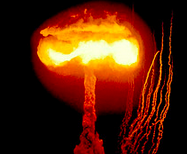 We’re in between two anniversaries at the moment. On 6 August 1945,  the United States dropped an atom bomb on Hiroshima; on 9 August 1945 it dropped another atom bomb on Nagasaki. Somewhere between 90,000 and 166,000 people died in Hiroshima, somewhere between 39,000 and 80,000 died in Nagasaki.  Half of these died on the first day. In the following months, many Japanese people died form burns, radiation sickness and other injuries. There was a fair-sized military garrison in Hiroshima but the majority of those who died were civilians.

Think about it. The Omagh bomb killed 29 people – or make that 31 if you count the unborn twins in their mother’s womb. OK, we’ll split the difference. Make it 30. What’s another death less or more. That’d mean, at the most conservative estimate, that for the death toll in Japan to be replicated here, we would have had to endure an Omagh death toll – 30 people-  every day of the year for 12 years. Think about it. No weeks off for holidays or days  off for the Sabbath. Every single 24-hour cycle for 12 years.

The Americans were the ones who dropped the bombs. Not just one city was hit, but two, to drive the point home. And yet, straight-faced, Bill Clinton at one point compared our warring sides here to a  couple of drunks who just can’t stay on the wagon. And yet, straight-faced,  the US decries Iran and other ‘rogue states’ for aiming to develop a nuclear arsenal. This must be the classic instance of a dark-as-midnight pot calling the kettle black. When they’re reminded of what they did, the Americans argue that there’d have been a far higher death toll of American troops had they tried to subjugate Japan with conventional weaponry. The thing is, we’ll never know about what might have happened; we do know what did happen.  At least 140,000 Japanese dead, with the lucky ones dying instantly.

And yet Jeremy Corbyn is denounced as a starry-eyed old dreamer when he talks of ending Britain’s reliance on nuclear weapons. The £100 billion saving could go to do all sorts of things in health, in education, in business.  David Cameron and the Conservative party say don’t be ridiculous, we need our nuclear deterrent. So are all the countries which haven’t developed a nuclear arsenal misguided and helpless?  Even though the weapons can only exist as a deterrent,  never actually used?

If Corby seems mad not to believe in the doctrine of Mutually Assured Destruction (MAD), what would you call those who want to spend £100billion on weapons that can never be used? When I was small, I remember overhearing my sisters and mother, as they washed the dishes, talking about a  bomb so big it could blow up the world.  I tried to grapple with that. You’d be safe nowhere: not up a tree or in an airplane or in a boat. For years after I had a recurring nightmare: the bomb had been dropped, the mushroom cloud was rising, it had happened:  the entire world was about to die. It was terrifying.

And now they say Jeremy Corbyn is mad to want to eliminate this monstrous, obscene, cripplingly-expensive, out-dated military option. If he never did another thing in his life, Corbyn has earned the gratitude of  every person on the planet for proposing a sane approach to his country’s defence system.

My night with Martin and George
The Red Arrows: so exciting, really!

54 Responses to Is Jeremy Corbyn MAD?