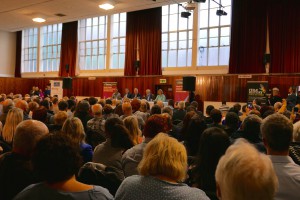 I’ve been going to the Feile An Phobail’s ‘West Belfast Talks Back’ discussion for over – well over – ten years now. I was at it last night and I’ve never seen it so packed. Normally the crowd are there with an interest in seeing the odd-man/woman-out: the unionist representative, the anti-republican commentator. Not last night. Last night it was to see an Englishman who over the years has been unambiguously a socialist and unambiguously supportive of a united Ireland. Last night it was Jeremy Corbyn.

The chairperson Noel Thompson came in first, Corbyn came in last, and it’s true what they say: he got a rock star reception. On TV he sometimes looks frail, oldish if not old; in person he’ s oldish but vigorous oldish. Not wasting energy but using it effectively. You could see why they flock to hear him speak throughout England with crowds of 1500, 2000 wherever he goes. He’s clear in his policies: anti-austerity because it doesn’t work and instead inflicts hardship on those least able to bear it. Anti- plastic bullets and water-cannon, whether that’s here or in Britain: they are dangerous and can kill.

If someone other than Corbyn had been there, the focus of attention would probably have been the DUP’s Gavin Robinson. Which would have been depressing. A young man in the audience said he was a Gaeilgeoir and why wasn’t there an Irish Language Act.  Gavin Robinson told him “Maith thú” and that it was good to see  him having an interest of this kind and he was perfectly free to maintain and develop it. But no Irish Language Act –  even though this was part  of the St Andrew’s Agreement. A woman in the audience asked about the use of plastic bullets. Gavin Robinson said he was for their use, since they were non-lethal weapons (this after the woman had listed the number of people , including children, who’ve been killed by plastic bullets). When someone pointed out that some of the millions going to police the Camp Twaddell protest could be used to develop an Irish Language Act, he was told by Robinson that all it would take to end Camp Twaddell and its  costs was for the nationalist/republican community to stand aside for five minutes and let the march through. I’m not sure what age Gavin Robinson is but I’d guess the mid-thirties. Not-an-inch is alive and well and living in his head.

But more than counter-balancing that was the calm, articulate, emphatically stated vision of Jeremy Corbyn. Noel Thompson suggested it was fine to be idealistic but you had to be pragmatic. Corbyn’s reply:  you face pragmatic decisions every day in your life, but that doesn’t mean they can’t be guided by clear principles.

Two polar opposites:  Gavin Robinson, a  younger man with all the attitudes of an amiable unionist politician from the 1950s. Jeremy Corbyn: an older man with a clear vision of the kind of society he believes is worthwhile and plans as to how it might be achieved. Still, maybe like realism, peace comes dropping slow. The fact that Robinson was seated beside Sinn Féin’s  Eoin O Broin without being overly  stony-faced is progress of a kind. Isn’t it?

Is Ted Heath guilty? No he’s not
CONFLICT  JUNKIES by Harry McAvinchey