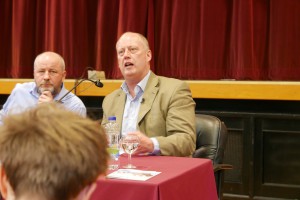 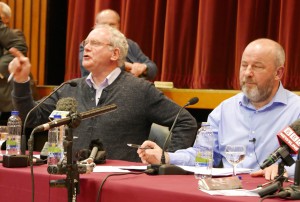 Outside there were about 200 protestors, with professional-looking banners declaring that the police/RUC/PSNI were not welcome in West Belfast. Inside it was packed, but my companion and I sidled past people and snaffled two reserved seats in the front row…Well, they could have been reserved for us, couldn’t they?

Casual dress was the order of the day, including Chief Constable George Hamilton and his attendant minders.  The minders stood in a cluster towards the right of the panel; on the other side was a cluster of  Sinn Féin significants: Gerry Adams, Gerry Kelly, Pat Sheehan and  more. It had the makings of a stand-off.

The debate at times was polite and even flattering, at times moving, at times exasperating. George Hamilton for the most part read his rather lengthy opening speech; Martin McGuinness appeared to have no notes of any kind, yet spoke with clarity and at equal length. Crouched on the floor in front of the panel, where he could get a good Periscoping record of the proceedings and everyone in the hall could get a good look at him, was Eamonn Mallie.

“Uncomfortable conversations” it was billed as, and in some respects it was. People who had lost loved ones at the hands of the ‘security’ forces, people representing the dead of Ballymurphy, expressed their scepticism about the Chief Constable’s promise that he’d be as thorough-going, neutral and transparent as the law allowed. You got the feeling not everyone believed him. When the Ballymurphy man complained that their case wasn’t receiving the PSNI man-power to fully investigate what happened, Hamilton’s reply was general and evasive. When someone demanded to know when the Stalker report and the Stevens Inquiry would be published, Hamilton spun another web of fine words:  he’d look into the matter. When he was asked about the MI5 war junkies of whom John O’Dowd spoke  recently, the Chief Constable produced another technicolor net.

As Dr Johnson said of a dog walking on its hind legs, it was not that the meeting was particularly  illuminating:  what was impressive was that it happened at all. And in West Belfast. When someone suggested that the Chief Constable was in thrall to Westminster and would do their bidding, Hamilton rejected the suggestion. Claimed he was given his position by local people and answerable to them only. Do I believe that? Let me put it like this: No.

Martin McGuinness spoke of having met Queen Elizabeth three times, as a gesture of reconciliation and respect to the unionist community. Yet when he walked the corridors of Stormont, he said,  a great number of unionist politicians failed to pass the time of day or even establish eye-contact.  Yet the Deputy First Minister spoke of his determination to keep  reaching out to unionism, and to making sure that all Sinn Féin MLAs conducted business on the hill in a polite and respectful way. You can interpret that as enormous patience and belief in the power of outreach, or you can see it as repeating the same action again and again, and expecting  a different outcome.

There were three groups responding to the meeting: the protest  people outside (rather more than micro), the wounded people in the audience, and the two-man panel of McGuinness and Hamilton. Some will see last night’s event as another example of republican outreach to former adversaries; others will see it as a PSNI attempt to paper over  RUC cracks and make vague, polite noises about the future.

In the end I found myself caught between two responses. One, admiration that Sinn Féin were prepared to sit down with the PSNI Chief Constable and build bridges over what had once been raging,blood-stained torrents. Two, considerable scepticism that the PSNI  Chief Constable’s presence was anything other than a PR exercise with little or no prospect of a practical outcome.

36 Responses to My night with Martin and George