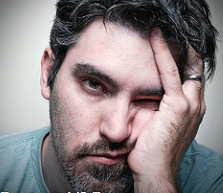 I M Weary:  Are you as fed up as I am with this whole does-the-IRA exist thing?

I M Weary : You’re not tempted to climb the walls and slide down them using your fingernails?

D Dóite: Oh, certainly I am. The reason I said ‘No’ in response to your question is that I am not as fed up as you. Your fed-upness compared to mine is like an emaciated mouse beside an over-weight elephant.

I M Weary: Who or what are you most fed up with?

D Dóite:  That is a very hard question to answer – there are so many contenders. Chief Constable George Hamilton, who’s managed to give the impression that the IRA killed Kevin McGuigan but in the same speech to say it was the Action Against Drugs outfit, who are a bunch of criminals, drug dealers and former members of the IRA. He’s a contender.

I M Weary:  He’d certainly be high on my list.

D Dóite: But I’d also have to give serious consideration for King of the Fed-up-givers to the UUP leader Mike Nesbitt. He’s for quitting Stormont because he couldn’t lead a party that sat in government with people – i.e, Sinn  Féin – who have links with killers.

I M Weary: Yet Mike teamed up with people who have links with the UVF and the UDA. Remember the time they were doing the Graduated Response thing?

D Dóite:  How could I forget?  He’s quitting the Executive because he says he’d have to sit with people who are linked with killers, even though he himself was linked with unionist paramilitary killers.

I M Weary: Can you think of anything worse?

D Dóite:  I can. The DUP contribution to the mess. They’ve accused the UUP of posturing and politicking, while it’s beyond Specsavers clear that the DUP’s decision to stay in or leave Stormont will be based, not on ethics, but potential election votes. The smell of hypocrisy is overpowering.

D Dóite: You can too what?

I M Weary:  I can too top that. Columnists.

D Dóite:  You mean fifth columnists? Like that IRA spy network they said was at the heart of government?

I M Weary: No – I mean the people that write in newspapers, explaining to everyone what’s happening and how they should feel.

D Dóite: And get paid for it.

I M Weary: But some of them…I’ll give you one example.

I M Weary:  The Venerable Organ.

I M Weary: In the VO this morning, one of these columnists is on about the IRA still being around. Here’s how it goes: “Likewise, the continuing existence of the IRA is obvious from any detailed examination of official reports, specifically the 2008 Independent Monitoring Commission report on the Provisional IRA leadership”.

D Dóite: So this columnist says the IRA is still around and the 2008 IMC report proves it. Sounds reasonable to me.

D Dóite: You must be kidding. Life is short.

I M Weary: Well, here’s a bit of what they say: “ In our view the way in which the leadership has adopted an entirely different course, disbanded terrorist related structures and capacity and engaged in different activities, and members have moved on to other things, means that the PIRA of the recent and violent past is well beyond recall.”

D Dóite: So the IMC in 2008 said the IRA had moved on and wasn’t coming back?

D Dóite: But  the VO columnist said the IRA was still chugging along, and indicated the IMC report as evidence of that.

D Dóite: Whereas when you check the IMC 2008 report, it says just about the exact opposite.

D Dóite: The moral being, don’t believe everything you read in the papers.

I M Weary: I have no intention of doing so.

D Dóite: You are weary of it all.

I M Weary: You are indeed fed up…Maybe somebody’ll kidnap a horse or a queen or something, and they’ll move on to that.

D Dóite: And you know who they’ll blame for it?

I M Weary: Oh here, here – stop, would you? I feel the need of a dark room and a bottle of whiskey.

D Dóite: May I join you?

View all posts by Jude Collins →
WHO DO YOU TRUST ? by Harry McAvinchey
Hand me that kitchen sink