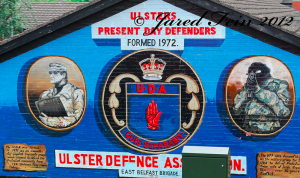 It appears DUP councillor Brian Kingston has his knickers in something of a twist.  He’s unhappy about two things –  the fact that the Wolfe Tones played until after 11.30 pm at the Ardoyne Fleadh, but worse -they sang a song that included the phrase “Ooh, aah, up the Ra!”  “They sang this line ‘up the Ra’ in front of a large crowd of impressionable young people at both the Féile on Saturday and the Ardoyne Fleadh on Sunday” Mr Kingston says.

Brian Warfield of the Wolfe Tones says he thinks Mr Kingston needs something to keep him occupied. “If someone wants to go and sing The Sash, no problem, in fact we have two records with The Sash mentioned. People should be more concerned about the problems in their city than a song.”

Mr Warfield has a point. The IRA are a defunct, ex-,  deceased, no longer existing organisation. So while Mr Kingston may find the lines grating, it’s a fair bet that no one in the audience will be persuaded towards IRA violence by the phrase.

In fact, if Mr Kingston finds time heavy on his hands, he might want to check out some of the murals, signs and flags in working-class unionist areas over recent weeks. There he’ll find flags honouring the UDA, the UVF, the UFF.  He’ll see murals depicting hooded loyalist gunmen with the slogan ‘Prepared for Peace, Ready for War’. Unlike the IRA, the UDA and UVF and UFF would appear to be functioning organisations. There was even a mural urging young people to join up, telling them it would be better to die on their feet rather than live in an Irish republic.  An ooh or an aah over a defunct organisation is dwarfed by this open acknowledgement that illegal paramilitary organisations exist and that they are urging young people to join them. When Mr Kingston has addressed that, then I’d say most people would take his concern over oohs and aahs and Ras  more seriously.

40 Responses to Paper tigers and the real thing