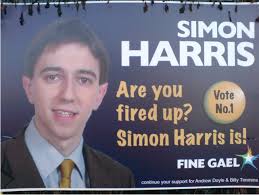 Do you know who Simon Harris is?  I am ashamed to admit that I really wasn’t clear on who this important man is- somewhere in my head he was mixed up with Simon Coveney. But all is now clear. Simon Harris is a Minister of State for the Department of Finance – in other words, he’s in Enda Kenny’s Cabinet. And in a Sindo interview yesterday, Simon is very clear on  who he doesn’t want in the Cabinet with him, or with anybody: the terrorist Gerry Adams. “ I am irritated” he says “ by this attempt to separate Gerry Adams like ‘he was in the past, he is still knocking around, but don’t worry about him’.”

So it’s an arguable ethical position for Simon to take. Someone who Simon believes was involved in violence isn’t the kind of person you want to have sitting across a Cabinet table from you. Or even beside you. (And no, Virginia: we will not talk about Martin McGuinness).

But let’s spool back nearly a hundred years  to the first Cabinet formed in Dublin post-1916.  It contained some interesting people.

There was Eoin MacNeill, who wrote the famous pamphlet ‘The North Began’, arguing that since the Ulster Volunteers had been formed to force Ireland in a particular direction, the Irish Volunteers should be formed as a counter-weight to match this armed threat. He served in that first Cabinet.

Then there was Cathal Brugha, who took part in the Easter Rising and was badly wounded. Weak from loss of blood, he was found singing ‘God Save Ireland’ and clutching a pistol. He recovered and served in that first Cabinet.

And of course there was Michael Collins, the most revered figure in the pantheon of Fine Gael, Simon’s party. He fought in the GPO in 1916. In the post-1916 period he created a special assassination unit called The Squad, which specialised in killing British agents and informers.  In 1920, he and his Squad wiped out a number of top British secret service agents in a series of co-ordinated raids, on the day that became known as Bloody Sunday. He served in that first Cabinet.

We could go on but one thing’s clear: the first Irish Cabinet in 1919 wasn’t short of what are now called terrorists. In fact, you could argue that Collins invented terrorism, in that his war strategy was based on the notion of ‘flying columns’ ,  with sudden attacks followed by  immediate withdrawal – a  system of warfare copied throughout the world. You could even say that, besides being the father of Fine Gael, Simon’s party, Michael Collins was the father of what some refer to as terrorism.  From which we get the term terrorist, and which for Simon disqualifies Gerry Adams from ever serving in a southern Cabinet. Yes, it’s thirty years since all that bad stuff, but once a terrorist, always a terrorist.

Just as well McNeill, Brugha and Collins didn’t have to wait thirty years.

19 Responses to Simon Harris gets fired up about Gerry Adams