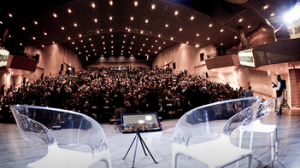 Picture by Meet the Media Guru

It’s easy to let yourself be misled. Yesterday evening  on Facebook and Twitter, I posted comments on the way that UTV and then the BBC covered the anniversary of the Miami Showband massacre. In the case of UTV, the word “collusion” was used once and then the story continued, as unruffled as if they had said “catwalk” or “cigarette”. The BBC did the report differently: they didn’t mention collusion at all. You could be misled into believing that the Miami Showband massacre was an attack by some vague unionist paramilitary group.  Certainly there was no intention to do other than minimise into invisibility any question of ‘security’ force involvement. When I pointed this out on Facebook and Twitter,  a flood of people came on to agree that such reporting glossed over or avoided completely  a shocking fact: the Miami Showband massacre saw agents of the state  involved in killing innocent people.  So am I saying the two TV reports were misleading? Yes. But equally important: we could be misled into thinking that social media have broken the grip of the traditional news -reporting sources.

Because they haven’t. Traditional media rule, OK or not.  A fine example appears in today’s Irish Times. The columnist Stephen Collins under the heading “Spectre of political instability haunts Europe”,  explains why so many countries throughout Europe are swinging to the left and/or the right politically. He explains to his readers why, in the south of Ireland, the emergence of Sinn Féin,  small left-wing parties and a range of independents has occurred: it’s because people have failed to give due credit to Fianna Fail, Fine Gael and Labour for saving the state from collapse and establishing “a remarkable economic recovery”. Instead a gap has opened up where Fianna Fail, Fine Gael and Labour used to be, and since nature abhors a vacuum,  extremists such as Sinn Féin have moved in to fill it. The  article is based on the premise that anything other than a middle way must be wrong. The natural and good state of affairs in the south of Ireland and throughout Europe is to have moderate governments in place. Unfortunately they’re not in place, or (as in the south) they’re under threat, and this is  the spectre that’s stalking Europe.

So here’s the thing: which do you think carries more weight with people: a posting on Facebook/Twitter  or a column from the likes of Stephen Collins? A UTV/BBC  report or a blogsite? I have no hesitation in saying that the Irish Times, UTV and BBC win out every time, and by the proverbial  country mile. That’s not to say that newspaper sales and TV news-viewing aren’t declining. They are. And part of that decline is due to social media like Facebook/Twitter/blogsites. But you can bet the family farm that the mainstream media still punch a helluva lot harder than voices from the internet. Only when enough people online are pointing up the flaws and omissions that are part of the mainstream narrative  will the general public begin to abandon the I-read-it-in-the-papers-saw-it-on-telly-it-must-be-true line.

Don’t be misled: that’s not a watchdog of democracy you’re reading or listening to – that’s an anaesthetist with a wad of cotton wool soaked in chloroform.

37 Responses to So what’s the real story?