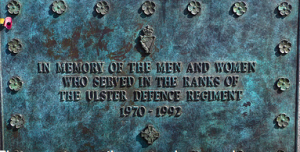 We can be very blinkered people in this sad corner of the world. I was listening on BBC Raidio Uladh/ Radio Ulster to a couple of local veterans who had been in the British army – both in the UDR I think. One of the men had lost both legs, both were passionate that more should be done for army veterans of campaigns stretching from the Second World War through our decades of conflict and up to the British army’s engagement in Afghanistan. The terms ‘Province’ and ‘mainland’ were frequently used and both felt that the sacrifice made by British army veterans had been under-served by the society they had fought to protect. The presenter Karen Patterson asked how they felt about those on the other side of the conflict here – should they not receive support as well? The answer from one of the men, Doug, was unambiguous: those who had engaged in conflict against soldiers such as himself should be recognised as veterans (and, he implied, receive the same support); those who had set out to kill innocent women and children should not.

It would be difficult to disagree with much of the argument put forward. Those who’ve suffered in fighting for a cause in which they believed do deserve recognition and support. Where the argument gets weaker is in its separating of the sheep from the goats. At least one of the men had served in the UDR; thanks to the research of people like Anne Cadwallader, we know that there was widespread collusion between the UDR, the RUC and unionist paramilitaries. And we know that this collusion often targeted innocent men, women and children. One example:  Jim Devlin, who played for the Tyrone Gaelic football team of the mid-fifties, was shot dead along with his wife Gertrud as they drove up the lane to their home in 1974. Jim was a supporter of the SDLP. To that single example so many others could be added: the Dublin-Monaghan bombs, the Miami Showband killings, the killings of the Reavey and O’Dowd family members – the list goes on.

The notion that the IRA were terrorists, in that their policy was to target innocent civilians, is denied by the facts. The notion that the UDR, RUC, British Army targeted only members of the IRA is denied by the facts. So for the two men on the radio this morning to seek support for those who suffered while members of British armed forces  here or abroad, is legitimate and understandable. But it must also factor in the uncomfortable truths of cruel and unjustifiable killings of innocent people from a Catholic/nationalist background by British ‘security’ forces. Equally, republicans did engage in acts of straightforward terrorism. But as a general policy their targets were those involved as active combatants in the British forces. To cling to the simplistic notion  that the IRA initiated and inflicted violence on an innocent population, and would have taken more innocent lives had it not been for the courage of the RUC/UDR/British army, is to pervert history.

62 Responses to Telling history or selling a distortion