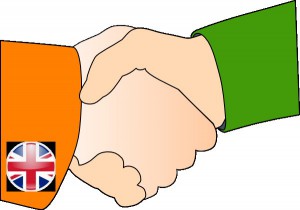 You might think a nebulous and vague inner mental concept such as the very  personal idea of “trust” , is the very last thing to bring up in the context of politics in Norneverland,  when we’ve all gotten on very adequately well without its encumbrance  for a surfeit of years. It’s a very odd idea and a very idiosyncratic novelty  to aspire to when we have never trusted each other….. ever. There has always been what is being thought  behind hooded eyelids and raised eyebrows and what is actually  being said for public consumption on the media..That’s why Sinn Fein had to jump through all those hoops about  decommissioning weapons, is it not? Outsiders had to be brought in to verify everything because nobody here trusted anybody to do anything without an impartial referee or three .

Realistically it would be a very odd thing for any trust to exist  between political rivals. The Ulster Unionists don’t trust the DUP for example. What the DUP think of Alliance or the SDLP is anyone’s  guess. It’s a mystery but  I don’t think there’d be much trust there either  . Didn’t the DUP set Alliance up for a campaign of hatred  from the knuckle-draggers a couple of short years ago over some nonsense about flags? Trust Alliance?… No they all but had them burned out of their offices by proxy, after spreading infamy about them  via a batch of several thousand leaflets that all but slandered the party.

So why this talk of “trust” now?

There’s a pretence that the  Executive is about to be pulled asunder because Sinn Fein have somehow given the go-ahead to return murder to the streets in their name.Sinn Fein have declined to believe that analysis and no-one has seen any proof of it so there is an ongoing  stalemate. All that has been decided is that the Ulster  Unionist Party and the DUP don’t trust Sinn Fein or each other. That might be fair enough .I did n’t believe  Prime Minister Tony Blair’s imaginary “Weapons of Mass Destruction” either when he romped into Iraq as America’s lapdog and  caused unholy mayhem .  I still remember the mothers and wives of soldiers arguing with him about it on television. He wanted us to believe that weapons existed without proffering any proof and he used it as a context for his political adventure . Nobody found any weapons , but it was too late by then when the bodybags were being stacked into aeroplanes and the hospitals were abrim with injured Iraqi children.

No it’s no good talking about “trust” when dealing with politics .It’s no good pretending either that there is no hypocrisy involved when we know that down through the ages for the whole of the Twentieth Century and for the first fifteen years of this new century , unionist politicians have rubbed shoulders with the “terrorists” or “anti-terrorists” which suited them. Only last year they gathered in an unholy alliance to proclaim a Graduated Response with a motley crew who suited their agenda. Whenever politics don’t work for them  ,you can really “trust” them to forget politics and bring insurrection back to the streets . Norneverland was founded on unlawful gun-running and largely sustained by unionist  mismanagement and low-level violence right up until the Civil Rights campaign of the 1960’s.

Just this week, information was released that the UDR consisted of a force made up of 97% armed and trained protestants who apparently  could not be trusted to side by the forces of law and order if they were forced by circumstances  to choose sides. That really says it all.

Everyone was supposed to put their “trust” in this “legal”  armed  group, no matter their political viewpoint.

Down through the years there were many of these groupings,”legal” or “illegal”, openly  or covertly  supported by  unionist politicians from the Unionist Establishment .Some of them made no bones about it , such as William McCrea who shared a platform with Billy Wright when he was known to be a psychopathic  killer of some infamy  and skill    and more recently  Peter Robinson and TV Mike Nesbitt and various Orange Order luminaries shared their dream of a “Graduated Response” with the likes of convicted  murderer Billy Hutchinson .In October 1974 Hutchinson and a fellow YCV member, Thomas Winstone, murdered two innocent Catholics  because their assumption was that any  Catholic equalled a republican.

That kind of support for the wilder men of unionism  is hardly surprising because these were the  kind of men whose votes were being harvested or hunted at regular elections and whose armed  unthinking muscle was required  should politics fail once more . Most of these men came from working-class communities  and were used as easily malleable cannon-fodder by their betters in unionism’s idea of  government. In many cases they had to be  interchangeable  between friends, families , the Orange Order and the various handsomely paid security forces.They had to be, for no other reason that they came from that same homogenous gene-pool of unionist voters. These were the same men who marched annually on the 12th of July or took to the streets in a Workers Council Strike  at the behest of unionism.

You’d better take a very deep breath before we proceed any further…..

Throughout the years of Unionist’s rule …the Official Unionist Party and latterly the DUP who soaked up those same voters….began with the rump of the  Ulster Volunteers in 1912 when they decided to take the law of the land into their own hands . That tradition of lawlessness continued with an alphabet soup of groupings that makes the the IRA’s title  seem pedestrian….

Like I said, they all spilled out of that same gene-pool of Protestantism , Orangeism and Unionism  and it’s really no surprise that although the names change and they are nominally legal or illegal, in Norneverland , “whatever that might mean”, as Prince Charles might say, , having been “Raised On Robbery “, as it were, we tend to accept that this is how things have always been since any of us can care to remember.A substantial percentage of our community have embraced this homogeneity avidly by actually referring to themselves as the “PUL community”. They’ve actually embraced another alphabetical moniker .”The Protestant Unionist  Loyalist” tribe wishing as they do to be stripped of personal individuality and  stamped like a stick of Blackpool Rock with the writing all the way through.

As far as “trust” is concerned there is no evidence  to be seen from unionism that they have attempted to cultivate any of that  “trust” in their attempts at shared  governance these past  several years of the experiment. You can erect sweet little statues of hands across the water in togetherness until the cows come home  but In fact the very opposite pertains . The proffered hand of friendship has been slapped down time and time again .Some find it difficult to even engage in the most anodyne courtesies and at times there have been  physical attacks on politicians  in the streets .

We can expect  mass-civil unrest should the very idea of a discussion about a possible political change  involving the notion of a united country ever reaches the debating chamber, even if there was a majority to support the idea..

“Trust” is a two-way street but we are all being forced to pretend otherwise..

23 Responses to WHO DO YOU TRUST ? by Harry McAvinchey