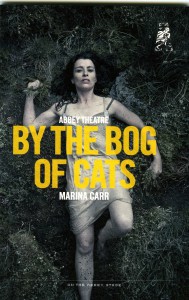 The Irish bog is a cultural as well as a natural landscape; it covers about 15% of the surface area and for many it has been an inescapable force in their lives. Joyce ends   ‘The Dead ‘ with images of the bog, suggesting immortality and Heaney frequently from ‘Digging’ to ‘Bogland’ turned to its presence in our lives. Two bodies of the ‘disappeared’ from the troubles in the North have recently been recovered from a bog in County Meath.

The Bog of Cats is bleak, frosty, forbidding terrain for the action of Marina Carr’s drama for modern Ireland; it is a gleaming amphitheatre, evoking Euripedes Medea, the inspiration for the play. A dead, black swan and a blind seer are early portents of the tragedy to unfold. Besieged by omens and visions, Hester (a wickedly triumphant Susan Lynch) is tortured by the mother who abandoned her as a child. She now faces betrayal by Carthage (Barry John O’Connor), the father of her child and bridegroom to the inadequate Caroline Cassidy (Rachel O’Byrne). The Bog of Cats is iced over, devoid of warmth, with Hester on the verge of being sucked into the earth; it’s a barren wasteland not quite of this earth.

Ireland has long had a male dominated social order lead by De Valera with his obsequious deference to a brutally repressive, Catholic Hierarchy. Tinker woman, Hester, rails against this and reflects the female values of life from her dead mother, a chilling Cat Woman and the little daughter, Josie. Some of the most moving scenes are those involving the women. Susan Lynch superbly exploits every scintilla of drama from this very well written part. The rest of the cast are cameos and onlookers as she self destructs.

More accustomed to genteel, Edinburgh audiences, I was taken aback but not totally surprised by the six curtain calls and standing ovation from the Abbey audience.

This towering performance was entirely deserving.

View all posts by Jude Collins →
THE BITER BIT
Wind power and Broughderg: backs against the wall