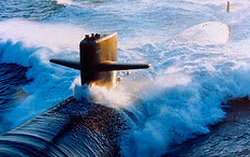 I remember in the early sixties, we asked our old History teacher if he thought there’d be a war between the US and the USSR. “Well” he said “there’s never in history been a huge stock-piling of weapons between two sides without those weapons eventually being used”. Mercifully he was wrong, otherwise I wouldn’t be writing this and you wouldn’t be reading it. Or maybe I should add he’s been wrong so far.

Because the nuclear weapons issue still casts a shadow over us all. There are a number of problems with nuclear weapons. First, they’re the weapons of terrorists. That is, they exist to be used against civilians – witness Hiroshima, Nagasaki. I don’t  know what the Geneva Convention says about that sort of thing but I say it’s totally immoral. If we condemn the attack on the Tullyvallen Orange hall – as we should – then logic demands that we condemn nuclear weapons, both their threat and/or their use. What nuclear weapons say is “We’re going to end civilisation as we know it”.

And this barbaric position doesn’t come cheap. The general figure cited for the life of the Trident nuclear submarines is £100 billion. So the British government is happy to suck £100 billion out of tax-payers’ pockets, in order to improve the quality of weapons which, if used, would lead to the death of hundreds of thousands, probably millions of people. And they tell us to resolve our differences peacefully.

Into this bleak picture step two figures. The first is Jeremy Corbyn. He says that if he is elected, he will address the nuclear weapons issue and end the Trident programme. Money that is planned to be used in creating death-dealing machines would instead be used in the hard-pressed National Health Service, in education and other constructive areas. The Tory response?  George Osborne says Corbyn is a threat to British national security. If you want to see how to brain-wash a people so that no trace of morality or even common sense is left, consider this: 80% of the British population are opposed to unilateral nuclear disarmament.

The other figure of hope is Nicola Sturgeon, the leader of the SNP. She wants the Trident submarines removed from Scottish territory and dismantled.  If you ever wanted to see the price that Scotland is paying for being in Union with Britain, just look to Faslane base in Scotland.  The Tory response? Osborne will immediately pump £500 million into Faslane.

Those opposed to unilateral disarmament usually justify their opposition by saying they favour multilateral nuclear disarmament. Well yes, that would be better, guys. But somebody has to break the logjam that’s been in place since the 1950s. Some country has to have the moral courage to say that it’s time that this madness was ended, and lead by example. Once that happens, there’ll be pressure on other countries to follow.

What we have is deeply immoral, vastly expensive and totally unnecessary. Do you think that if Britain were to suffer or even be threatened directly with a nuclear attack, that the US and other countries like France wouldn’t respond? The national security  argument is as fake as a £3 coin.

Immoral, expensive, unnecessary. To which you can add hypocritical. Britain professes itself shocked and disgusted by single beheadings and the destruction of historic sites by ISIS. Meanwhile, Britain herself threatens to wipe out whole civilisations, maybe humankind itself. The stench of hypocrisy and stupidity is overpowering.

11 Responses to Faslane: the place where insanity and cost meet