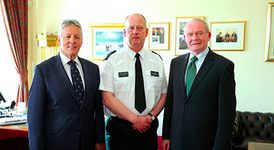 Did my ears deceive me, or did I just hear on TV  the Chief Constable and one of his understrappers both make patently clear that the IRA does not exist as a paramilitary organisation?  That its active service units no longer exist? That its members have now turned their attention to working for their goals through exclusively peaceful means?

Because if I did, then Mike Nesbitt is exposed as the most breath-takingly opportunistic politician that we’ve seen around for a while, and that’s saying something. Close behind him of course is Peter Robinson, huffing and puffing about this very serious situation.

Listen, guys. No paramilitary organisation  – got that? No active service units – OK? The IRA, according to the Chief Constable, is addressing itself to things in a totally peaceful way. Surely that has penetrated into the echoing space between your ears. And yet you’re yelling that the political sky is falling. Well done, men. You’re really serving your constituents well.

And it’s no good saying two men have been violently killed. We know that. There was also a unionist/loyalist a month ago who is alleged to have tried to kill a police officer with a sword. Another loyalist/unionist man of violence thought that nailing another man’s hand to a counter was a good idea. Did either of these events excite your condemnation? Comment even? And yes,  Peter, we know you spoke up for that elderly gentleman. The one who forty years ago was in possession of guns and explosives. As First Minister serving all the people, you did what you could to get him off.

I’m not sure what the police were up to, when they spoke words that somehow allowed unionist politicians, notably the Ulster Unionists, to clap their hand to their collective throat and shriek. But this evening, on TV, the police made it clear that the IRA has abandoned violence. So now tell me again: what was the terrible threat to our institutions that required one unionist party to stride in a high moral dudgeon out of the Executive, and a second unionist party to call for the suspension of Stormont over the next four weeks?

We all know there’s an election early next year. But do you have blunder about and make your electioneering so obvious? I suspect there will be more thoughtful unionist voters who will not appreciate being offered a paper tiger and told that it really can roar.

View all posts by Jude Collins →
Dying to Live. By Randall Stephen Hall©
WE ARE HUMAN , ARE WE HUMAN by Harry McAvinchey

24 Responses to If the Chief Constable said what I think he said, then WTF???