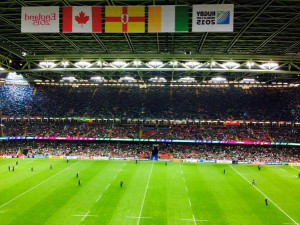 I didn’t watch the Canada vs Ireland rugby game yesterday. Yes I know – what kind of Irishman am I, that I wouldn’t watch and support our national team, blah blah blah. I didn’t watch it because I’ve never been interested in rugby, even though when I was a youth there were those who, when they saw me play Gaelic football,  liked to suggest that I had the kind of, um, skills  valuable in a rugby player. The shape that rugby players come in – so many of them appear to have no neck,  and quite a few have at least one ear which looks more like a blob-of-flesh afterthought – doesn’t suggest a game that’s good for the human body. But I do accept that there are can thrilling moments in rugby games. Brian O’Driscoll, when he wasn’t being pulverised by the Aussies or was it the Kiwis, could do some pretty marvellous things.  And Mike Gibson when he was in his prime was a thing of beauty and wonder.  But as I say I missed the game yesterday.

However, somebody sent me a photograph taken during the game and at first glance it seems to explain the final score of 50-17: Canada was playing against not one but two teams. At least that’s the impression you’d get if you checked the flag lay-out above the pitch: one Canada flag, one Irish flag and one…oh no, it’s not a country, it’s a province – Ulster – Ulster’s flag.

What’s it doing there? Where is the Munster flag? They’ve done great things in rugby. Or Leinster. They’ve been pretty prominent too. Or even Connaught. Why not flags for them? Well you see, the Ulster players might not like the idea of playing for Ireland if we didn’t give them a special recognition. After all, within Ireland, much of Ulster is a special case, holding different loyalties from the rest of the country.

In which case, why wasn’t the Fleurdelisé draped alongside the Canadian flag? You know the Fleurdelisé – the Quebec flag. A huge number of people in Quebec think differently from the rest of Canada. For God’s sake, they even speak a different language!  And yet there was no recognition of their difference within Canada, no flag to assert their uniqueness.

The truth is,  Irish rugby in at least two respects is now a joke. We have the draping of the Ulster flag alongside the Irish flag, as if the Ulster contribution to the Ireland team was something special. It’s not. No more special as I say than Munster or Leinster or Connaught, God help us. You may say “But we have to reassure unionist rugby players that we recognise their difference from the rest of Ireland”. What, then, about the nationalists who live in Ulster? Are they being told they’re different from the rest of Ireland, that their loyalties lie across the Irish Sea? Or do nationalist sensitivities not matter?

Then there’s the “Ireland’s Call” anthem. Despite the fact that it was composed by an ex-classmate of mine, it’s the most self-apologetic, ridiculous idea that we’ve had foisted on us in a long time. Is there any other rugby country in the world that’s embarrassed to play its own national anthem, in case some of the team members might get upset? If you opt to play for Ireland, play for Ireland and accept your place in the team like any other player. If you opt not to play for Ireland, that’s your right. But please, don’t come into the team and expect a second flag so your feelings don’t get ruffled, or a daft musical comedy tune so you won’t feel too excluded.

These kind of things usually come in threes. I wonder what further act of self-abasement will be delivered in the Irish rugby world. Any suggestions? Maybe change the team name to “Ireland and Ulster”?