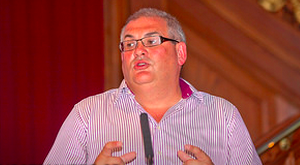 I was listening to Professor Peter Shirlow, late of this parish, on THE VIEW (BBC ONE) the other night. He was talking about the possible replacement of Dr Alasdair McDonnell by Colum Eastwood come November, and he tossed in something that I thought deserved to be challenged but wasn’t. He was stressing the importance of Colum Eastwood or Alasdair McDonnell winning elections. “It’s like Jeremy Corbyn – will he win elections? And the answer is, of course he won’t”.

This is part of a repeated mantra throughout the British media. You might like Corbyn, you might detest him, but he’s not going to win any elections. I call that line of talk insidious and pompous and, ultimately, stupid. It’ll be five years before Jeremy Corbyn as leader of the Labour Party is put to the test. The Labour Party has lost the last two general elections in Britain. Corbyn , on grounds of strategy as well as conviction, is advocating a radically different approach. Of course you can say “The great majority of the British people don’t see things his way”. Is mor an trua sin – more’s the pity. The point is, he has five years to convince them that his way is a better way, a more compassionate way, a more successful way. Maybe he won’t succeed. But to decide he won’t succeed because right now, the mass of the British public don’t see things his way is pompous and, as I said, ultimately stupid. If you follow that line of thinking to its logical conclusion, the Labour Party should adopt Tory policies and make them central to their next election manifesto, on the grounds that that is what most British people are thinking…Oh. They tried that the last two times out. And it was catastrophic. Mmmm. I rest my case.

View all posts by Jude Collins →
THE DEVIL’S DISPLEASURE
Does the GAA need flags and anthems?

25 Responses to Pete and Jeremy and being certain