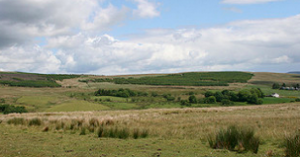 It’s sometimes irritating the way the world tends to offer up contradictory visions. Take for example wind power. On the fact of it, wind power is a Good Thing. It harks back to the simpler days of windmills. It harnesses natural energy and involves, one would think, zero carbon emissions. And some of those wind turbine farms can look…awe-inspirting. Future-world-ish. Striking.

The catch comes when the question “Where?” is raised. Would you like a wind turbine farm at the end of your street? On the mountain behind your house? In a scenic coastal area? Another catch comes in the fact that providing wind power can be a lucrative business, given that governments, sometimes for good reasons and sometimes because they want to look good, are happy to subsidise wind power development.

Let’s look at our local situation. The DUP, despite the fact that Sammy Wilson is a climate-change denier, is in favour of developing wind power. Or it would appear so, judging by the energy displayed by DUP man Jonathan Bell. Somewhere in the mix there too, it’s alleged, is one Gareth Robinson, close relative of former First Minister Peter Robinson.

Which brings us to Broughderg. This is a rural area in Co Tyrone, a few miles from Draperstown, Co Derry. People have been living there, it’s believed, for over 7,000 years. Put simply, the wind energy industry has designs on putting in place a wind farm that would generate energy for decades. This would also help to line the pockets, I’m told, of foreign investors behind the project. A number of large landowners, many of whom are absentee, also appear to favour the scheme. The local people, as embodied in the Broughderg Area Development Association, are opposed. They believe it will damage a place of great natural beauty, they worry about health issues, they are faced with the fact that the designated area will be sterile as far as planning applications are concerned. In short, the wind energy project in Broughderg is dividing the people of that area.

It gets murkier the more you delve. I’m told that the by-now-overly-well-known firm of Tughans is working with those planning to build wind turbines. If the scheme is implemented, it will result in the depopulation of the area, already a problem. It’ll also put the boot into efforts to generate tourism in an area that has great potential in that respect.

But aren’t these green people who are proposing the installation of wind turbines – green in terms of energy? Doing us all a favour? Indeed. As one resident put it, this is a big commercial wolf masquerading as an ecological lamb.

Few people would dispute the need for green energy. But as we saw with the rejection of a huge incinerator near Mallusk yesterday, such moves can have a crippling effect on local communities. In fact there are similarities between some alternative energy schemes and Orange marches. Both would claim to be engaged in innocent/beneficial activities; but both want to go, are doing their damnedest to see that they do go, where the local community heartily wish they wouldn’t. In the end, like so much else, it’s a battle between outsiders and big money, and local people whose voices get drowned out. Public apathy or public support will help decide who wins in Broughderg.

14 Responses to Wind power and Broughderg: backs against the wall