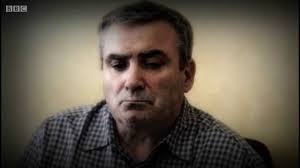 Wow. And there are still people who don’t believe in spooks. Freddie Scappatacci aka (allegedly) Stakeknife, the man who (allegedly) led the IRA’s internal unit to winkle out informers and punish them accordingly, is now to be questioned about up to 20 killings. So says Barra McGrory, the Director of Public Prosecutions. Mark Thompson of the Committee on the Administration of Justice says it could be more like 40.

Freddie is interesting for a number of reasons. If you recall his famous appearance on TV after being outed, where his solicitor read a statement denying that he was Stakeknife or anything like that, he was one very anxious man. Why was he anxious? After all, the police or the British authorities didn’t arrest him, and he must have known they weren’t going to arrest him. So why was he so on edge?

Because he, of all people, knew what happened in the IRA to touts/spies/double agents: they got killed.

Question: how or why was it that, in 2003, Scappaticci was outed? It’s hard to know. Perhaps to discredit the entire IRA campaign in the eyes of republicans. Perhaps to reveal the truth about the past. Perhaps – could it be?- so that republicans, or relatives of those alleged to have been tortured and killed by Scappaticci and his ‘nutting’ squad, would kill him.

If that had happened, it would have been convenient for his British handlers: dead men tell no tales. There are those who believe that is precisely why he was outed. But he wasn’t killed. And now he’s resurfaced, or that’s the expectation. I’d imagine that Freddie himself was expecting that his British handlers would give him a new life and that he would be left to live out his days in peace.

Another expectation is that there will be revelations showing his British handlers were complicit in the deaths of many people – as I say, somewhere between 20 and 40 – and that those handlers were taking orders from very high up the British security food chain.

Will all now be revealed? Will the trail of deception and betrayal and killing lead to senior figures in British political life at the time? The optimistic part of me wants to say Yes, this time the truth about the dirty war will out, and the myth of IRA-bad/British -‘security’- forces -good will be shattered for keeps. The realistic part of me says it’ll be a re-run of Bloody Sunday: much wringing of hands, fingers of accusation pointed at some lower ranks, followed by a full and frank apology. Agus sin é – and that’ll be it. Because to reveal the truth of British ruthlessness during the dirty war would disrupt the accepted narrative of good and evil during those years. And that would open up a vista beyond appalling. And that won’t happen.