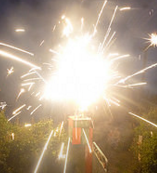 The charming  English custom of burning Guy Fawkes in effigy for an alleged plot to blow up Parliament in 1605 did not arise from the people’s love of their King and Parliament.  It was a  duty imposed on English people by their rulers and it remained law until 1859.  Had Hitler’s Third Reich endured, perhaps Germans would still be burning Jews and Communists in effigy to commemorate the Reichstag Fire of 1933. Hitler and his followers made no secret of their admiration for the ruthlessness and mendacity of Britain’s Imperialist master class and they were to prove that imitation is the sincerest form of flattery.

The Great Fire of London of 1666 is commemorated by a Monument, 202 feet high completed in 1677. From then until 1830 it was engraved with the falsehood that the fire was started by Catholics. The poet Alexander Pope, himself a Catholic, wrote –
“Where London’s column, pointing at  the skies,
Like a tall bully, lifts the head, and lies.”
The poet died in 1744, some 86 years before the lying inscription was removed from London’s tallest monument.
Perhaps it’s time to cast a cold eye on “facts” which rulers want us to remember. A century on from the First War the stories put about by the British Government of the time, and disbelieved by informed and honest Britons at the time, are accepted as Holy Writ. For years the British Government had encouraged Italy to seize Libya, then ruled by the Ottoman Empire.  France, which  attacked Prussia in 1870 and lost, was encouraged to seize back the lost provinces of Alsace and Lorraine. Britain had an understanding with the revenge-seeking French, and had been building battle ships and established  a Committee of Imperial Defence, not unsuited for Imperial Attack. The Official Secrets Act was in place to gag those who knew what going on, and it is still with us. Secret Intelligence Services, later known as MI5, MI6, etc were established. A Great British  worldwide spy network was well established by 1914.
The idea that Britain, France or Russia “sleepwalked into war” is  nonsense.   Britain and France gained huge territories from the Ottomans and invented nations unheard of in 1913  –  Iraq and Syria, for instance. They promised Palestine to the Arabs living there and to Jews living anywhere. In Europe they created YUGOSLAVIA and CZECHOSLOVAKIA, “nations” unheard of in 1913 and not much heard about today. Truly something to remember with pride
Russia had been lured into the war by the prospect of taking Constantinople from the Turks, but the Russian Revolution intervened. The unsporting Bolsheviks published the secret treaties by which Britain and France agreed how they would divide between themselves territory stolen from the Ottomans.It may take another couple of centuries before the self-serving stories told by the victors of the Great War are finally exposed as poppycock.

View all posts by Jude Collins →
Unionism and the Easter Rising by Ciaran Mc
Feile an Phobail : unbalanced funding?