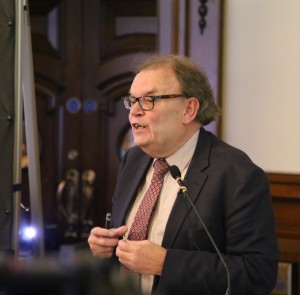 I got a voice message from the Nolan show this morning, asking me if I’d respond to some remarks Ken Wilkinson has apparently made, that anyone who attends events commemorating the Easter Rising is a traitor. I haven’t heard back from them so maybe they’ve found someone with more outlandish views (as neill would put it) on the subject. Anyway, the upside is you get to hear my thinking. (Hands over ears time, neill…)

Firstly, Ken or no one else who doesn’t want to need attend any events commemorating the Easter Rising of 1916. It’s not a royal command attendance or anything.  But I gather the invitation to unionists is been made in a spirit of hospitality and inclusiveness.  I think we got a glimpse of what that means in Belfast City Hall yesterday, when the programme of commemorative events was launched. After the Lord Mayor and Tom Hartley of Sinn Féin had spoken, there was a dramatic presentation of an argument between a woman who’s just come with the news that James Connolly has been shot dead and a young Irish soldier who sees his duty as being to fight in the  Great War. Both sides of the argument were vigorously presented and roundly applauded.

That’s because history is a complex thing – and, whether we like it or not, shared. The Ulster Volunteers in the north begat the Irish Volunteers in the south – and, it’s possible to argue, the Easter Rising.  It’s only through looking at these things and seeing the linkage between them that we can avoid the enmities and divisions of the past. I would have thought that a commendable approach.

But would attendance be treachery, as Ken Wilkinson maintains? Well you could consider it that if you see attendance at any of the events as turning your back on your Britishness and embracing republicanism. I don’t think anyone in the nationalist/republican community would interpret attendance in such a way. They’d be more likely to commend the  attendee for their openness and breadth o f vision. Which brings us to the big stumbling block in the way of Ken’s treachery argument: was Queen Elizabeth a traitor when, a few years ago, she stood with bowed head at the Garden of Remembrance in Dublin?

View all posts by Jude Collins →
Yesterday’s Sindo: let us pray
Unionism and the Easter Rising by Ciaran Mc