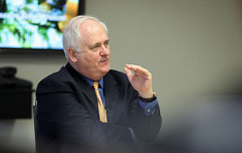 Four score and seventeen years ago Irish voters dispatched the already terminally- ill  Irish Parliamentary Party of John Redmond  and John Dillon  to its political grave. Three generations later  political grave-robbers,  led by  ex- Taoiseach John Bruton,  seek to clobber those  voters’ descendants with the exhumed  bones of  the  departed Party,  persuade  them that  their ancestors were too stupid to know what they  were doing,  and  even  suggest that the ratios of seats won by the various parties did not  reflect their popular support.The grave-robbers are rich in assertions and generous in their distribution. Alas they have been so sparing with evidence to support their assertions, that the suspicion arises that they have none.

As an amateur, armchair student of history since the early 1950s, I’m happy to provide evidence that

suggests that Mr Bruton and his supporters are, if not trying to sell us a pup, trying to flog us a dead

horse, or convince us of the continued good health of a Monty Python Parrot —-

“The Sinn Fein victory in East Clare is a fact of cardinal significance, and has precipitated events. Following as it does on a course of extreme leniency  and conciliation which culminated in the general amnesty of political prisoners and tacit tolerance of seditious and secessionist  propaganda, it marks the definite failure of the policy to rehabilitate constitutional nationalism or disarm Sinn Fein defiance of English rule. After making all deductions for local influence and the general revolt against the Redmondite party machine, the fact remains that in a remarkably well conducted political contest sustained by excellent candidates on both sides, the electors on a singularly-frank issue of self-Government within the Empire versus an Independent Irish Republic, have  overwhelmingly pronounced for the latter.”

– Ivor Churchill. Lord Wimbourne, Lord Lieutenant of Ireland, to the British Cabinet, 14 July 1917.. (The text of this message was a state secret until 1967.)

The losing candidate, Patrick Lynch, KC, Crown Prosecutor, wrote to the British Secretary of State for Ireland, also on 14 July 1917, saying – ” I have come to the conclusion that the country is passing through a phase of excitement that will not last.”  Shortly thereafter Patrick Lynch joined Sinn Fein. From 1932 to 1940 he served as Attorney General in  Fianna Fail Governments led by Eamon de Valera, who had beaten him in 1917 in the East Clare by-election, on behalf of Sinn Fein.

The Redmondite Party had been haemorrhaging support and principles for some time before 1917. They lost ten seats in 1910 which they never recovered and were found to have been involved in corrupt practices and/or intimidation in three constituencies. No such charges have ever been been laid before, much less sustained, by  any tribunal against Sinn Fein since its inception, despite the innuendo of academic and journalistic commentators. All eight seats in Cork went to William O’Brien’s All For Ireland League, which stood down in 1918 and endorsed Sinn Fein. Larry Ginnell, who had been Private Secretary to John Dillon, stood as an Independent in 1910 and was elected. In 1918 he stood, and was elected as a Sinn Feiner.

There seems to have been no defection from Sinn Fein, Labour, or any other interest, to the Redmondite/Dillonite party. There were no able, ambitious and thrusting men ready to step into the old

leaders’ shoes and offer a vision for Ireland’s future. And the Party was too faint-hearted to attempt to win fair, brunette or auburn ladies to its ranks and its support.

In separate interviews with C.P. Scott in of The Manchester Guardian 1913, both John Redmond and John Dillon had declared their vehement opposition to Woman’s Suffrage, and publicised their jettisoning of a cause they had espoused in their youth. Dillon said that a year earlier he had been pulled two ways on the subject, and had, as a democrat been in favour, but as a Catholic opposed. Redmond did not oppose suffrage from Catholic principle, but said the attitudes inculcated by the Church in women, -reserve, retirement and modesty – were adverse to it.

The General Election of 1918 left the Irish Party with a mere 6 seats in Ireland, some of which they owed to an anti-Unionist pact with Sinn Fein. Sinn Fein won 73 seats and the Unionists 26. Subsequent local

elections and the General Elections of 1921 and 1922 confirmed Sinn Fein’s popularity, and for nearly a

century most elected politicians in Ireland have come from parties, including John Bruton’s Fine Gael with their origins in Sinn Fein.

The seat de Valera first won in 1917  for Sinn Fein he retained in each General Election until and including 1957. The 1917 By-election had resulted from the death of Major Willie Redmond, brother of John Redmond, in the Great War. In 1918 de Valera not only retained that seat but also contested and won John Dillon’s  seat in East Mayo.

Dillon wrote an undated letter to C.P.Scott  in December 1918:

“According to my reports I have been beaten in East Mayo by a two thousand majority. The result was brought about by a system of intimidation -the most ferocious and elaborately organised I have ever known. Organised by the secret society. Armed bands were brought from other counties – 400 or 500 from Clare   – and the people were threatened with death if they voted for me. -‘The friend of England’  (!!!) . If the people had been free to vote as they wished, I am quite certain I would have won at least two to one.   Redmond, in his zeal for the War, allowed all our organisation lapse – we had no campaign to meet this campaign of intimidation.”

Had there been a smidgen of truth in Dillon’s rant it would have been in all the papers. Ireland was swarming with reporters, before, during and after the election. C.P.Scott had been a Liberal MP and had

known and been friendly with Dilllon and the other Irish Party MPs. He was, when Dillon wrote

him in 1918, the long-standing editor of the Manchester Guardian, whose professional reputation is still invoked by The Guardian a century later. There was nothing about Sinn Fein intimidation nor any suggestion that Irish voters could be browbeaten in any of the papers. Besides, since 1872 Ballots had been secret.

De Valera and most of Sinn Fein’s leadership were in British Jails during  the election,  having   been rounded up for the spurious “German Plot.” Sinn Fein’s Manifesto had been mauled by the British Censor, its meetings broken up and posters hauled down by the well-armed Royal Irish Constabulary. Republicans were virtually unarmed in 1918 and remained very poorly armed until the 1921 Truce .There were never as many as 400 firearms in Republican hands in Clare, or Mayo.

John Dillon had lost the plot, his party was finished. John Bruton’s  campaign to resurrect its reputation  is perverse and may yet be regarded as the repetition of the historical activities of Burke and Hare, but this  time as farce.

P.S. Sources include Changing Times – Ireland since 1898 as seen by Edward MacLysaght  published by Colin Smythe, Gerrards Cross, England, 1978 and The Political Diaries of C.P.Scott 1911 -1928, edited by Trevor Wilson.