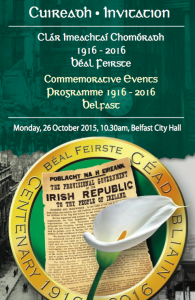 Are Unionists capable of commemorating the centenary of the 1916 Easter Rising and engaging with historical narratives anathema to their own?

Yesterday, events to commemorate the Centenary of the Rising were rolled out, in Belfast City Hall, the location of the signing of the Ulster Covenant in 1912. Tom Hartley, proposed the idea that all perspectives on the Easter Rising should be heard, inviting Unionists to take part in the commemoration. Ken Wilkinson, the PUP activist, has already threw his hat in the ring and stated, he would not be taking part in such commemorations, “traitors” he referred to those who took part.. Others, like UPRG spokesman, Jackie McDonald, have been a little more cautious in their approach, stating there is a “lack of awareness about historical events.” Maybe education and awareness of historical events, would help understanding, respect, tolerance and our society … “darkness cannot drive out darkness, only light can do that.”

Do Unionists have a connection to the Easter Rising? Well, it could be argued, yes! Indirectly, they do!

Professor Michael Laffan, the retired UCD history lecturer, rightly states that “without Edward Carson and James Craig, there would have been no Easter Rising.” Whether Unionists accept it or not, the Easter Rising is an ingrained part of their History, the history of why we are, where are are today – it cannot be denied. Although it may not fit their historical narrative of the past, the impact of Unionist resistance to Home Rule, amongst other factors, was a contributory factor to the Rising breaking out on the streets of Dublin in April, 1916.

The violent rhetoric and verbal menace of Edward Carson and Conservative leader, Andrew Bonar Law, during the Home Rule crisis, 1912-14, contributed to a rise in radical Nationalism, giving them a boost, particularly that of the old Fenian tradition whose flame was rekindled. As Unionism increased their resistance, Nationalism was brought in from the cold. Nationalism and in effect revolutionary Nationalism became a reaction to the militancy of Ulster Unionists. This militancy created the Easter Rising.

In opposition to Home Rule, the inflammatory and contemptuous extra parliamentary speeches of the time, the frequent use of the word “force”, the text of the Ulster covenant stating Unionists would oppose Home Rule “by all means necessary”, the Blenheim Demonstration where Bonar Law pre-empted the use of violence, committing the Conservative Party to what Beckett described, an “extreme course”, all created a revolutionary and rancorous atmosphere of the time. Carson’s increasing militant rhetoric culminated in the formation of the Ulster Volunteers in 1913 (with the encouragement of Bonar Law’s Tory Party), embracing physical force as a political strategy and the reemergence of the gun in Irish politics, triggering a chain of events, that no one could have otherwise foreseen. The open display of militarism through drilling, parading and marching and to have a direct impact across Irish society.

As a direct consequence of the formation of the UVF, the nationalist equivalent, the Irish Volunteers were set up in November 1913, reviving the dormant physical force tradition of Irish Nationalism. The Irish Volunteers, born to defend the right to Home Rule, were to provide a front for the Irish Republican Brotherhood, and according to Kathleen Clarke, the wife of Tom, “gave the IRB the chance they had been waiting for.” It was the IRB who infiltrated the Irish Volunteers, scheming behind the back of leader Eoin ManNeill, increasing the probability of a Rising taking place – World War One was to provide the cover, circumstances were exploited by the IRB, who through Carson were revived, they were given their lifeline. Prior to this, the IRB were a grouping on a life support machine – the emergence of the IVF allowed them to breath, whilst simultaneously grow stronger.

The radicalisation of Carsonism, converted many Home Rulers into radical Nationalists. After the Home Rule Bill was suspended in September 1914, some Nationalists, caught up in the time, became disillusioned with Redmond’s constitutional stance, diverting them into more radical groupings. Carsonism, provided the IRB with the opportunity they had so long waited. Patrick Pearse, the future Easter Rising leader, is one example of someone who was radicalised in response to the militancy of Ulster Unionism and the arming of the Ulster Volunteers. He argued that Nationalists should do the same. Carson further exasperated Nationalist sentiments by landing 25,000 weapons in Larne and other ports in April 1914, as Asquith and the British government stood idly by, “the headless chicken variety” according to Historian Maume. The Irish Volunteers reciprocated with the landing of weapons in Howth, July 1914. It seems, Nationalism played “follow the leader”, the leader being Unionism, only for revolutionary Nationalism, to eventually take the lead and rebel.

In many ways, “unionism gave the kiss of life to Irish revolutionaries”, the events that Carson triggered, would have appalled him. Carson and the increasingly militancy of Ulster Unionism, during the period 1912-14, helped lay the foundation for what was to become the Easter Rising. Without Carson, the extra parliamentary nature of resistance, the militancy of the UVF, the Rising may never have happened – are Unionists willing to accept this view, that Unionism was a contributor? Are they willing to accept, their history is intermingled with that of Nationalist / Republican history? Instead of “us” and “their” history, would it not be wiser to talk about “our” history? By failing to connect with periods of history, we are doing a disservice to history! I agree with Gustave Flaubert when he states, “Our ignorance of History causes us to slander our own times.” With such a divisive past, it is ever possible for us to move on?

24 Responses to Unionism and the Easter Rising by Ciaran Mc