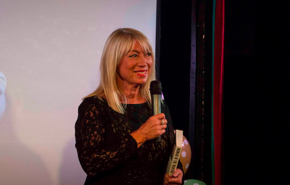 Why did successive governments and the Irish people of the south so desperately want the Troubles to end? Not too hard to answer that one, you say – because they didn’t want the violence spilling over into the twenty-six counties and besides, they abhorred the idea of lives on both sides being taken in the north.

The first reason – keep the violence in the north – isn’t particularly noble  but it’s understandable. Few want a conflict, in which they’re not involved, to escalate and suck them in. The second reason – a recoiling from the taking of human life – is noble. Violence or war, as Jeremy Corbyn said yesterday, should be the very last resort to solve a problem, not the first.

I found myself thinking about these things as I watched RTÉ’s former newsreader, Anne Doyle, feature last night in the first of an RTÉ series, Ireland’s Rising. In the course of the programme she went back to her home county of Wexford, where she talked to people and thought about the Easter Rising as it affected Enniscorthy and Ferns. For the most part the Rising was confined to Dublin. Enniscorthy was different – 300 Volunteers took over the town. They cut down trees and dug trenches to stop British military reinforcements reaching Dublin via Rosslare. The sons and grandchildren of those who had fought and some who had died fighting were interviewed. Anne sat in a wood where the Volunteers had sat, “steeled for the fight, ready to rise for Ireland”. A final sequence showed a series of Wexford children holding big photographs of their grandfathers or great-grandfathers who had fought and in some cases died, telling the camera how proud they felt to be related to them. “For five days, the people of Ferns had lived in an Irish republic” the voice-over told us.

Which raises three questions. One, wasn’t this almost exactly the kind of violence the people of the south spent thirty years disowning during our recent Troubles? Two, were the men and women of Wexford who participated in the Rising aiming to achieve a 26-county republic? And finally, is it not odd for people who detest violence in the north to then have their children hold images of family members who fought and/or died violently, and express their admiration for their courage?  Some people would and have described that kind of thing as child abuse.

‘To air strike or not to air strike Syria? – That is the question’ by Ciaran Mc
Seven points about abortion

78 Responses to Anne Doyle and the Wexford Rising